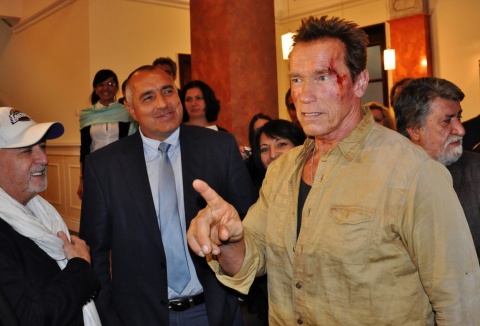 Arnold Schwarzenegger (right) with Bulgarian PM Boyko Borisov (middle) and Nu Boyana CEO David Varod on the set of "The Expendables 2". The sequel to the hit Hollywood action is being shot in Sofia. Photo by BGNES

Borisov and Schwarzenegger met Monday at the Nu Boyana Film Studios, where "The Expendables 2" is being shot.

"I am very happy to be in Bulgaria and that we have such good relations. Avi Lerner (producer and Nu Image/Millennium Films CEO - editor's note) has been making films all his life and he has great faith in this country. This is why we are here", Schwarzenegger said, expressing his satisfaction with the working conditions offered.

Elaborating on the benefits for the economy from developing the film industry, PM Borisov stressed the government's contributions for the results achieved in the sphere over the past two years.

"Something long-forgotten has happened - film tickets get sold out, theater-goers have to wait for 2-3 months to be able to see a performance. A very good generation of Bulgarian actors is growing up, Bulgarian TV series are experiencing a revival, and your presence here helps to draw even more attention to Bulgarian cinema", Borisov stated.

Borisov explained that, by sharing their impressions of Bulgaria, celebrities like Schwarzenegger and his colleagues altered foreign stereotypes of the country and brought it new fame.

In the course of the talks, Schwarzenegger showed interest in visiting the excavation works for the construction of an underground history museum in downtown Sofia displaying the city's ancient and medieval history.