NGO Urges Bulgarians in Macedonia to Declare Their Identity during Census 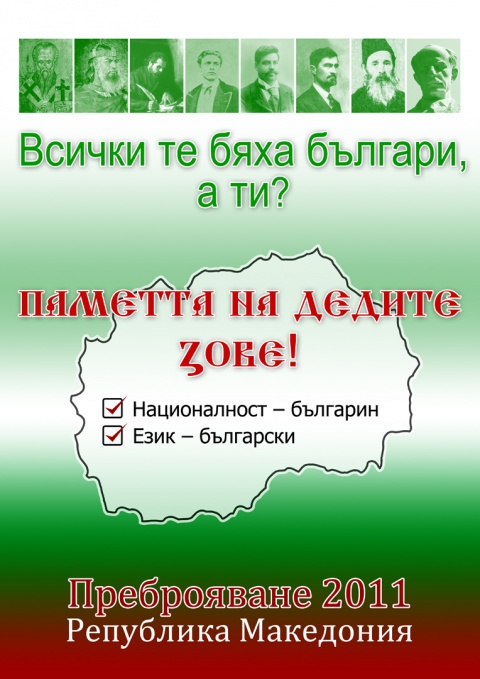 Pictured: a poster of the Bulgarian Cultural Club in Skopje, a NGO, urging Macedonians with Bulgarian self-consciousness to declare themselves as Bulgarians during Macedonia's census.

The Bulgarian Cultural Club in Skopje, an NGO, has started a campaign encouraging Macedonians with Bulgarian self-consciousness to declare themselves as Bulgarians during Macedonia's current census.

The Bulgarian Cultural Club in Skopje has released a video and poster "whose aim is to spread the truth about the ethnic character of the population of Macedonia", as cited by the press service of the Bulgarian nationalist party VMRO.

The motto of the video, which features major Bulgarian historical figures from Macedonia such as St. Kliment Ohridski (author of the Cyrillic alphabet), medieval Bulgarian Tsar Samuil, Farther Paisiy Hilendarski (author of Bulgaria's first history), revolutionary Gotse Delchev, among others, as well as Bulgaria's Apostle of Freedom Vasil Levski, is "Ancestors' Memory Calling".

The campaign further poses the question, "All of them were Bulgarians. What about you?"

The video and poster also demonstrates how those Macedonians with Bulgarian self-consciousness can declare their Bulgarian self-determination and Bulgarian as their native language.

The Chair of the Bulgarian Cultural Club in Skopje Lazar Mladenov has issued a call for spreading the video and posters online in order to reach as many Macedonians as possible, the VMRO party says.

About 40 000 Macedonians have acquired Bulgarian passports since 2002 on the grounds of "Bulgarian origin." For the purposes of naturalization, Bulgaria's government considers the Macedonians of Slavic origin to be entitled to claim ethnic Bulgarian origin for historical regions.

In recent years, Bulgarian historians and nationalist circles have been speaking out against the "falsification" of Bulgarian history used to "create" a Macedonian nation by the authorities of the former Yugoslavia in order to dissociate the population of what is today the Republic of Macedonia with Bulgaria.

There has been an increasing number of reports about the harrassment by Macedonia's authorities of Macedonians declaring themselves to be Bulgarians. Notable cases in the past two years include the fate of young mother Spaska Mitrova from Gevgelija and the family of Zdravko Zdraveski from Prilep.