Dilma Rousseff Visits Grave of Her Bulgarian Brother in Sofia 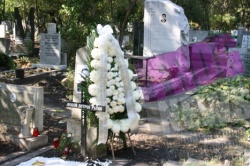 Pictured: the white-flower wreath laid by Dilma Rousseff at the grave of her Bulgarian half-brother. Photo by Frognews

Brazil's President Dilma Rousseff has paid a visit to the grave of Lyuben-Kamen Rusev, her Bulgarian half-brother, whom she never met.

Russeff's visit to the central cemetery in Sofia was not part of her public program for her first ever trip to Bulgaria.

Dilma Rousseff, the first woman to become President of Brazil, is the daughter of Bulgarian immigrant Petar Rusev (Pedro Rousseff) (1900-1962), who left Bulgaria in 1929 for France, and ended in Brazil after World War II. Before emigrating, however, Rusev had a wife in Sofia, who gave birth to a son, Lyuben-Kamen, shortly after he had left.

Brazil's President visited her half-brother's grave in Sofia early Thursday morning, on the second day of her Bulgarian visit, before she left Sofia for the cities of Veliko Tarnovo and Gabrovo, the birthplace of her brother, Frognews reported.

Dilma is reported to have left a wreath of 100 flowers at her brother's grave, with an inscription in Portuguese, "With Love for My Late Brother". She lit a candle and spent 20 minutes at the grave.

Servicemen from the cemetery are cited as saying that they had not even known whom the grave in question belonged to, and that the grave was cleaned and restored several days before the visit of the Brazilian President, when a photo of the late Lyuben-Kamen Rusev was added to the tombstone.

Dilma's half-brother Lyuben-Kamen Rusev (1929-2007) had communication with his sister in Brazil by mail.

At one point, Dilma decided on her own to help financially her ailing Bulgarian half-brother in 2006, as Novinite.com (Sofia News Agency) reported in November 2010.