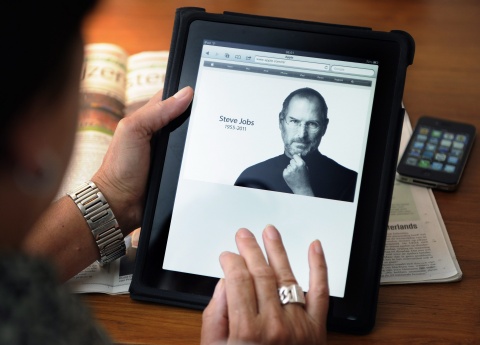 Admirers of Steve Jobs are gathering at Apple stores all over the world to pay their respects to the deceased visionary who transformed the everyday life of millions.

Apple's co-founder died in Palo Alto, California on Wednesday at the age of 56 after a long battle with cancer and other health issues.

He had stepped down as chief executive of the company in August.

According to reports of international media, tear-eyed fans lined up at Apple stores in New York, Shanghai, Hong Kong, Sidney and other major cities to pay tribute to the creative genius.

They placed flowers, lit candles and left messages on cards and photos of Jobs.

Neighborhood children drew hearts with markers in front of Jobs' home in Paolo Alto and left them on the ground for others to leave messages.

Flags outside Apple's headquarters in Cupertino flew at half mast as distraught fans gathered on a nearby lawn to lay flowers.

Judging by online comments, computer fans and experts in the field in China were particularly moved, insisting that the newly launched iPhone 4S is just "iPhone for Steve."

"I now understand why the iPhone 5 can only be called iPhone 4S, because that stands for 'iPhone for Steve.' I will buy a new iPhone 4S to remember great Jobs," microblogger "Xue Qi" said, as cited by the Xinhua News Agency,

"His creativity and imagination had made the whole world astonished. His death means the end of an era," microblogger "Li Rong" wrote.

In Hong Kong, Apple fans left sunflowers and messages outside stores, saying that Jobs' spirit will live forever and that he will be sorely missed.

At an Apple store in New York, someone left an apple, with one bite taken out of it, mimicking the Apple logo. A note read: "iThankYou.", The New York Times reported.

Outside the flagship Apple store on Fifth Avenue in Manhattan, people had left two bouquets of roses and some candles late last night, and some sat around quietly using their Apple laptops.

At an Apple store in San Francisco, Mr David Lauder-Walker, 42, was buying headphones for his iPhone when he got a text from a friend about Mr Jobs' death.

"He was really somebody who changed the conversation," he said, "for whom good enough wasn't good enough."