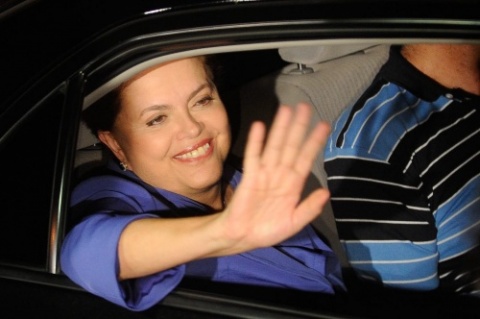 "I feel tenderness and love for Bulgaria. And I can even say that to a certain extent I do feel like I am Bulgarian," Dilma Rousseff said in an interview for 24 Hours daily at the end of September last year. Photo by EPA/BGNES

A year after Dilma Rousseff won the presidential elections in Brazil and the hearts of thousands of Bulgarians, the small European country has been trapped by a "Dilma fever" for the second time.

Bulgarian media is showering a round-the-clock attention on Rousseff and her visit here on October 5-6, highlighting primarily the fact that she is a Bulgarian descendant.

In Bulgaria dailies, magazines, broadcasting and television stations have been following closely the Brazilian presidential electoral campaign, the election of the Bulgarian descendant to rule over the world's seventh largest economy and her term up to this moment.

It has been with great pride and a desire to see her soon that the Bulgarian family of Brazilian President Dilma Rousseff and the whole country welcomed the news of her triumphant election win in the most influential country in Latin America and her promise for a visit.

Dilma Rousseff kept her promise – she arrived in Bulgaria, the country in which her father was born, an hour before midnight on Tuesday.

Rousseff was welcomed by the president's head of office Gen. Nikola Kolev, Chief Secretary Krasimir Stoyanov, representatives of the Foreign Ministry, the ambassador of Brazil and other officials.

Rousseff's official two-day visit kicks off on Wednesday. The Brazilian President was invited by her Bulgarian counterpart Georgi Parvanov already in November 2010.

Rousseff is the first Brazilian President to visit Bulgaria ever since the diplomatic relations between the two countries were reestablished 50 years ago. Her delegation includes key Brazilian business representatives.

In Sofia, Rousseff has on her agenda official meetings with Parvanov, as well with Prime Minister, Boyko Borisov, who secured her visit around New Years while in Brazil for her inauguration.

Less than a week before Brazilians went to the polls in October last year, Dilma Rousseff made an emotional confession about the land of her father.

"I feel tenderness and love for Bulgaria. And I can even say that to a certain extent I do feel like I am Bulgarian, even though I have never been in the country where my father was born. My father died when I was only fifteen years old and I did not have the chance to learn Bulgarian," Dilma Rousseff said in an interview for 24 Hours daily.

Asked whether Bulgarians can expect her to pay a visit to the country, Dilma Rousseff said there was no doubt about that.

"My relatives in Bulgaria should expect my visit shortly. I am looking forward to finally meeting them."

Dilma Vana Rousseff was born on December 14, 1947, in Belo Horizonte, in the family of Bulgarian immigrant Petar Rusev (1900-1962), aka Pedro Rousseff, a lawyer and construction entrepreneur, and Dilma Jane Silva, a school teacher whose parents were ranchers.

In 2003, Brazilian President Lula surprisingly chose Dilma for Minister of Energy. She became most famous for implementing a program called "Electricity for All" designed to bring electric power to households of Brazil's underdeveloped and remote regions, and was later picked to be his Chief of Staff.

Dilma has become the first female head of government in the history of Brazil, and the first de facto female head of state since the death of Maria I, Queen of the United Kingdom of Portugal, Brazil and the Algarves in 1816.

Even though her country's economy has slowed down after the boom in the years of her predecessor, Lula da Silva, Rousseff still enjoys a good deal of support and is considered to be one of the world's most influential women.