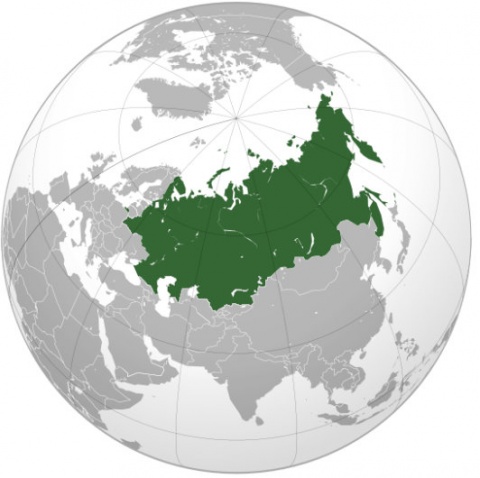 The Customs Union of Russia, Belarus, and Kazakhstan, which is to become a Common Economic Space, encompasses most of the terrirotory of the former Soviet Union. Map from Wikipedia

Russia's past and "future" President and current PM Vladimir Putin has formally proposed the forming of a "Eurasian Union" of former Soviet nations.

In an article published Tuesday in the daily Izvestia, Putin declared that the new alliance – which is to be based on the Common Economic Space between Russia, Belarus, and Kazakhstan - should emerge as "one of the poles of the modern world, serving as an efficient link between Europe and the dynamic Asia-Pacific region."

The Russian leader further claimed that the future ex-Soviet bloc could become a major global player competing for influence with the United States, the European Union and Asia.

However, Putin, who has famously described the 1991 collapse of the Soviet Union as the "greatest geopolitical catastrophe of the 20th century," denied that his proposal represents an attempt to rebuild the Soviet empire.

"There is no talk about rebuilding the USSR in one way or another," Putin said. "It would be naive to try to restore or copy something that belongs to the past, but a close integration based on new values and economic and political foundation is a demand of the present time."

Russia, Belarus and Kazakhstan already have formed an economic alliance that has removed customs barriers in mutual trade during the past summer. They are to introduce unified market rules and regulations starting Jan. 1. Putin said that Kyrgyzstan and Tajikistan were expected to join the grouping.

Russian Prime Minister Vladimir Putin emphasized the importance of the Common Economic Space of Belarus, Kazakhstan and Russia. The Russian prime minister said that CES businessmen would gain the right to choose the country to register a firm in, as well as to do business and deal with customs clearance.

"This is a strong incentive for national bureaucracies to improve market institutions, administrative procedures, business and investment climate," he said.

According to Vladimir Putin, the CES is a "historic milestone" for all post-Soviet states. The Russian prime minister said that the CES must become a project, separate from "the current political differences, and any other environment."

"It is crucial that the CES will be based on concerted action in key institutional areas – in macroeconomics, rules of competition, technical regulations and agricultural subsidies, transport, tariffs of natural monopolies and only then - in a single visa and migration policy, which will remove border controls at internal borders," said Vladimir Putin.

According to him, the citizens will get "the opportunity to choose without restrictions where to live, work and be educated," while the volume of goods for personal consumption, which can be imported duty free, will also grow. The Russian prime minister believes that the "new and dynamic markets" will operate by the uniform standards and requirements for goods and services, harmonized with the European ones in most cases. "Moreover, each company in every CES member-state will actually enjoy all the benefits of local producers, including access to government contracts," he said, as cited by Telegraf.by, a Belarusian website.

However, he stressed that "in order to gain a foothold in such an open market, businesses have to work on their efficiency, cut down on their costs and invest in modernization." "The decision to begin the codification of the legal framework of the Customs Union and Common Economic Space has been taken to ease the task for economic actors in dealing with multiple paragraphs, articles and reference rules. They will need only two basic documents - the Customs Code and Codified agreement on Customs Union and CES," said the head of the Russian government.

"It is important that the public of our countries, as well as the entrepreneurs could take the integration project not as a terminal bureaucratic game, but as an absolutely living organism, a good opportunity to implement initiatives and achieve success," he said.

"The combination of capital, natural and human resources will allow the Eurasian Union to be competitive in the industrial and technological race, in search for investors, in creating new jobs and innovative industries. And along with other key players and regional agencies - such as EU, U.S., China and APEC - to ensure the sustainability of global development," said the prime minister of Russia.

He called the "false fork" the statement of some countries that participation in the advanced integration projects in post-Soviet order is contrary to their European choice.

"We are not going to fence ourselves off or resist anyone. The Eurasian Union will be based on universal principles of integration as an integral part of Greater Europe under auspices of freedom, democracy and market laws," he said, noting that "besides direct economic benefits, joining the Eurasian Union will allow each of its members to integrate into Europe more quickly and in a stronger position."

However, "Russia and its partners will actively work on improving the institutions of the Commonwealth, the saturation of its practical agenda," he said.

The Russian state leader stressed what he hopes would be relations of mutual cooperation and benefit between the European Union and his project for a Eurasian Union.

"Two of the largest unions of our continent - the European Union and the emerging Eurasian Union - objectively basing their interaction on the rules of free trade and compliance management systems, including through the relations with third countries and regional bodies, are able to extend these principles throughout the whole space - from the Atlantic to the Pacific, the space that will be harmonious in its economic nature, but polycentric in terms of specific mechanisms and management decisions. Then it will be logical to initiate a constructive dialogue on the principles of interaction with the Asia-Pacific, North America and other regions," Vladimir Putin.

According to him, the Eurasian Union "will allow us not only to fit into the global economy and trading system, but also to participate meaningfully in decision-making process, defining the rules of the game and contours of the future." "Establishment of the Eurasian Union and the effective integration are the path that will enable its participants to take their rightful place in the complex world of the XXI century. Only by working together our countries will be able to make the top leaders of global growth and civilization progress, success and prosperity," concluded Vladimir Putin.

The Russian Prime Minister said that the problems of the world economic crisis rooted in a backlog of global imbalances. "The solution may become the development of common approaches, as they say, "from the bottom." At first - within the existing regional structures - the EU, NAFTA, APEC, ASEAN and others, and then - through a dialogue among them. It is from such integration "building blocks" a more sustainable global economy may be constructed," he said.

Putin is certain to become President of Russia once again, this time for a six-year term in the March 2012 elections. He has remained Russia's de-facto leader after shifting into the premier's job due to a term limit, and his protege and successor Dmitry Medvedev proposed last month that Putin run for president.

In addition, it was decided that President Dmitry Medvedev will run for the State Duma elections, scheduled for December 4, 2011, to take over as prime minister.