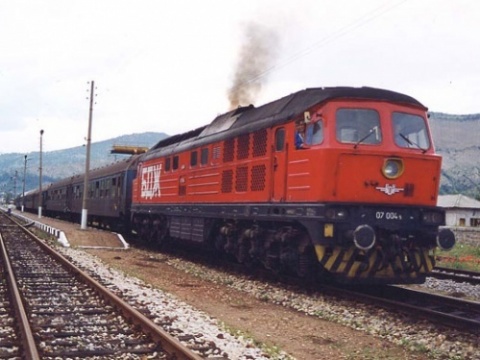 The troubled Bulgarian State-owned railroad company BDZ has a debt of BGN 800 M, which the railroads have not been paying since 2008. File photo

Bulgaria's State-owned railroad company BDZ will be granted a loan from the World Bank after it manages to collect enough revenues so that it can pay at least the interest on its outstanding debt.

The statement was made Monday by Deputy Prime Minister and Finance Minister, Simeon Djankov, during a meeting between representatives of the cabinet, BDZ, and the trade unions with PM, Boyko Borisov.

Djankov explained the World Bank is "enthusiastic" about granting the loan, but he was the one halting the procedure over the BGN 800 M in debt which the railroads have not been paying since 2008.

Several months ago, the cabinet and the Bank signed a memorandum for a loan of BGN 480 M to be used to repay the debt. The loan will have to be repaid by funds from the State budget while the conditions relate to reforms in the sector to make it more profitable.

The Finance Minister did not offer any precise numbers and redirected questions of where the revenues would come from to the management of BDZ with the words: "it is none of my business to decide on the measures, but they can include attracting more cargo or something as simple as the sale of old engines and cars for scrap."

The management of the railroads also failed to give details on how they plan to increase revenues, in addition to the scrap sales. The BDZ Director only explained the said sale will amount to BGN 34-40 M, but it remains unclear if this amount will be sufficient to pay the interest on the debt or where other resources would come from.

Another meeting under the same format is scheduled for Friday where a detailed plan on paying the interest must be presented. Participants will address then other debatable issues, which have triggered the discontent of the trade unions, such as the signing of a class labor contract, layoffs and restructuring of the company. If these issues are resolved to the satisfaction of the trade unions, the latter promise they will stop preparations for a mass strike.

The management of the company plans to reduce personnel by 1 000 people and redirect them to newly-created cleaning and security firms in partnership with private ones. BDZ assure nobody is going to lose their job, but the trade unions disagree.