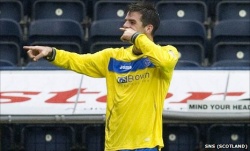 Sheridan celebrates his winning goal at Kilmarnock on Saturday. Photo by SNS

Bulgaria's champion CSKA Sofia is considering the sale of Irish striker Cillian Sheridan, who is now in his second loan spell at St Johnstone, according to reports.

Two clubs are said to have shown interest in the offer, whose price has been tagged at EUR 300.000, according to insiders.

The former Celtic striker signed last summer a three-year deal with CSKA Sofia after passing a medical, ending his four-year stay in Scotland.

Even though Sheridan has told British media his priority is to become a success at CSKA Sofia, his return to his parent club in Bulgaria is highly unlikely not least because here he did not have enough opportunities to reveal his potential.

"Ideally, I'd want to be playing for my team in Sofia," he told BBC Scotland.

"But that's not happening at the minute, so I've come away to get games and in January I'll have to see where I am."

But he says a lack of opportunities at CSKA Sofia - though he did rack up 26 games last season - ultimately led him to seek a temporary move again.

"I had a year to get used to it [Sofia], I was settling in but on the football side of it, there was a change of manager and then I wasn't playing," he added.

"Things like that happen in football that are outwith your control, so it was really just a chance to come and play again."

Sheridan is now in his second loan spell at St Johnstone, having gone there initially while under contract at Celtic.

He also played for Motherwell and Plymouth on loan and admits his nomadic career-path is far from ideal.