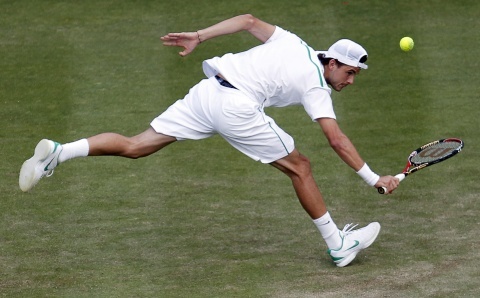 Grigor Dimitrov of Bulgaria returns to Jo-Wilfried Tsonga of France during their second round match for the Wimbledon Championships at the All England Lawn Tennis Club, in London, Britain, 23 June 2011. EPA/BGNES

By reaching the quarterfinals Dimitrov gained 17'400 USD of the prize money and 45 ranking points which would position him to around No 70.

The Bulgarian is yet to win against any Top 10 player. His win-loss score is 0-5 after losses to Rafael Nadal, Gilles Simon (twice), David Ferrer and now Gael Monfils.

The quarterfinal Dimitrov-Murray will start at 7pm local time (2pm CET) on Friday.