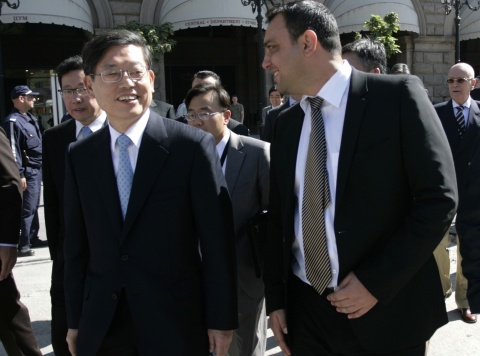 The Governor of Bulgaria's Plovdiv Region, Ivan Totev, had been forced to buy a pair of new sneakers for South Korea's Prime Minister,Kim Hwang-sik, during the latter's visit in the country's second largest city.

The embarrassing incident was reported Wednesday by the local site Plovdiv24.bg.

The South Korean PM is on an official three-day visit to Bulgaria. According to the report, during his Tuesday meeting with Bulgarian counterpart, Boyko Borisov, Hwang-sik had been invited to visit Plovdiv to learn about the country's cultural and historical heritage.

"We prepared an agenda of how to present our beautiful, picturesque city. The problem arose when we headed to the Old Town and found out the cobblestone on the streets was in such deplorable state that Mr. Hwang-sik's security guards banned him from stepping on them with the shoes he was wearing. We decided then to run to the nearest store and buy a pair of sneakers so that our dignified guest could tour Old Town," Totev is quoted saying.

The Governor has further pointed out he felt very embarrassed by the incident and by being forced to offer explanations as to why the City Hall is maintaining the architectural open air museum in such condition that visitors must buy special shoes in order to take a walk.