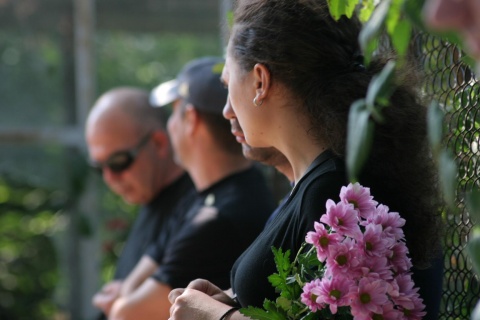 After the violent protests subsided, the village of Katunitsa, near the town of Plovdiv, has been buried in grief over the death of the two young men.

The father of the 19-year old teenager, who was struck and killed by a mini-bus driver linked to a controversial local Roma leader, triggering a wave of protests, has called against using his tragedy for political benefits.

"I want to thank all of Bulgaria for the support that I feel. I regret that my son had to die to make us aware of how bad things are. And yet I believe in the rule of law in Bulgaria," Atanas Petrov, father of the murdered Angel, told bTV channel in an emotional interview on Wednesday.

Ten years of smoldering tensions between Kiril Rashkov, an affluent self-proclaimed Roma "tsar", and the residents of the village of Katunitsa, escalated at the end of last week into riots, cutting short the lives of two young Bulgarians. Their murder stirred sheer outrage in social networks and a wave of rallies across the country.

"I'm sorry that you [the journalists] did not come earlier to see the nephews of Kiril Rashkov [the alleged mastermind of the murder] coming to the cemetery to light a candle at Angel's grave. The worst thing would be if the memory of the two dead boys is tainted. The worst thing would be if all this is politicized, Angel's memory abused and used for political gains."

"My hope is that no father ever again is forced to run after a bus, which is running over and dragging his child, while he is banging on the van and begging the driver to stop. That no parent lives to take his dying child in his hands and beg him to take a breath so they it may survive. That's all," the boy's father concluded.