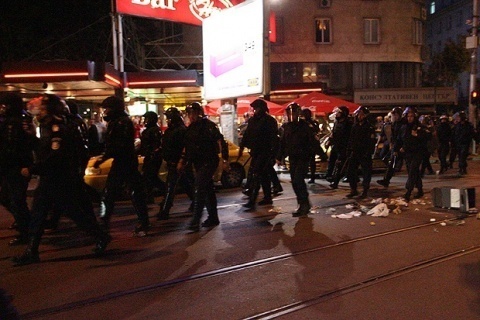 Anti-Gypsy demonstrations that began during the weekend continued to spread across Bulgaria on Tuesday evening in response to the killing of a man by a minibus whose driver is linked to a man accused of being a Roma crime boss.

Prime Minister Boyko M. Borisov and his main political rival, President Georgi S. Parvanov, made a show of bipartisan unity Monday in visiting Katunitsa, the village where the killing happened on Friday. Protesters had burned houses and cars belonging to the family of the supposed crime boss, Kiril Rashkov, while demanding that the authorities "deport" the family from the village, which has a population of 2,300.

"Ethnic peace is the only way to guarantee Bulgaria's prosperity," Mr. Borisov told a meeting of government ministers on Tuesday. "Every other action guarantees the failure of the country and falling into deep isolation."

The news media referred to the protests as "pogroms." The protesters shouted racist slogans like "Gypsies into soap" and "Turks under the knife."

The police guarded entrances to Roma neighborhoods across the country as demonstrators announced protests on Tuesday evening in 20 cities, including Sofia, the capital. Roma men are reported to have taken up clubs and axes in response to rumors of invasions by skinheads.

The chief national prosecutor, Boris Velchev, sent orders to local prosecutors on Tuesday telling them to "immediately" arrest and investigate those "inciting ethnic hatreds," a criminal offense in Bulgaria punishable by up to six years in prison and fines up to ?15,000, or ,000.

"The institutions are standing together firm in their opposition to such radical and extreme feelings," Mr. Parvanov said Monday. On Tuesday, he called a special meeting of the Consultative Council for National Security for Saturday to address the threats caused by the rising ethnic tensions.

The demonstrations began after word spread that Angel Petrov, 19, had been run over by a minibus driven by a relative of Mr. Rashkov's while walking his dog, Atanas Petrov, his father, said on the television station BTV.

Over 125 people were arrested during the weekend, 28 of whom were charged with hooliganism, after soccer fans joined the local protesters. Hundreds of nationalists rode their motorcycles to Katunitsa on Sunday to show their support. About 100 other people were arrested on Monday around the country.

In the Communist era, Mr. Rashkov, 69, was convicted several times of offenses involving illegal foreign exchange and gold transactions. In 1998, he founded a Roma political party.

Mr. Borisov has emphasized that the death in Katunitsa is a criminal problem, not an ethnic one. He promised that the authorities were investigating Mr. Rashkov and the origin of his wealth and that results could be expected soon.

Bulgaria has faced years of heavy criticism from the European Union for failing to reform its ineffective judicial system and for not prosecuting any high-level organized-crime figures or corrupt government officials.

Every town in Bulgaria has local crime bosses, be they Roma or ethnic Bulgarian, said Krasimir Kunev, president of the Bulgarian Helsinki Committee, a human rights organization in Sofia. The government has consistently failed to prosecute them, he said.

"These incidents have deep roots in Bulgaria's post-Communist transition," he said.

Mr. Kunev said the police reacted slowly at the beginning of the protest, encouraging the proliferation of ethnic hatred. He said there was no reason to think that anti-Roma feelings were especially high at the moment. "It has always been very high," Mr. Kunev said.

"In such an atmosphere, there should be no surprise that you have so many young people marching on the streets, shouting racist slogans and destroying property," Mr. Kunev said. But he said that later actions by law enforcement officials had been sufficient.

The government said there was no delay in its response. "The actions of the Interior Ministry have been on time, adequate and fully corresponded to the situation," said a spokeswoman, Vania Valkova.

Andrei Raichev, a political analyst at Gallup International in Sofia, said the passions stemmed from three qualities attributed to Mr. Rashkov: criminality, extreme wealth and Roma ethnicity. These, he said, are the "three kinds of hatred here."

"I can't ever remember such a case of mass aggression against Roma," he said.