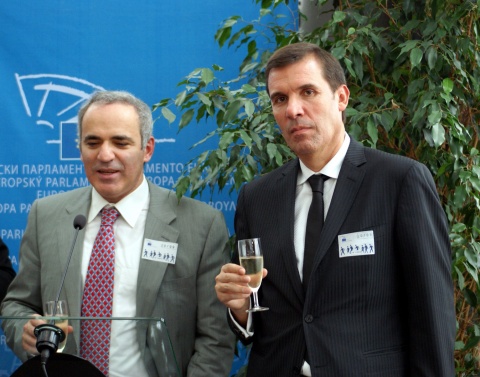 On September 20, Silvio Danailov (r) and Garry Kasparov (l), one of the world's legendary chess players and Chairman of the Kasparov Chess Foundation Europe presented during a public hearing at the European Parliament their program for 'Chess in European

Bulgaria's "Eurostandard" English language highschool has become the first school in Europe to introduce chess as an obligatory subject for all its students, according to a local news report.

The school has worked in collaboration with Bulgarian Silvio Danailov, President of the European Chess Union, in order to prepare and introduce the project, the News.bg news agency has informed.

On September 20, Silvio Danailov and Garry Kasparov, one of the world's legendary chess players and Chairman of the Kasparov Chess Foundation Europe presented during a public hearing at the European Parliament their program for 'Chess in European Schools'.

The program is designed to promote chess in schools throughout Europe by offering chess curriculums, chess materials, chess teachers and communication material to encourage and motivate children to discover and learn the game.

Chess is a fairly popular sport in Bulgaria and children in the Balkan country often learn how to play it at an early age.