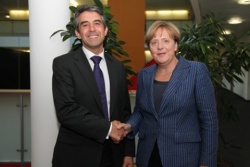 Rosen Plevneliev, who is running for the Bulgarian Presidency on part of the ruling center-right party GERB, (left) met with German Chancellor Merkel in Berlin. Photo by GERB party

German Chancellor Angela Merkel has thrown her weight behind Rosen Plevneliev, the candidate of the ruling center-right party GERB, for the Bulgarian Presidency.

The party of Bulgarian Prime Minister Boyko Borisov has boasted close ties with Merkel and her party, the Christian-Democratic Union of Germany.

Merkel met with Plevneliev within a sustainable growth discussion organized by the CDU headquarters and the Konrad Adenauer Foundation in Berlin.

“Lots of good news about Bulgaria are reaching me. You are sending only positive signals about the development of your country, I support you, and I wish you success in the elections,” Merkel told Plevneliev.

The German Chancellor is reported to have told Plevneliev that Bulgaria “seems very well internationally,” and has expressed confidence that “the government of Prime Minister Boyko Borisov will continue this trend.”

Plevneliev, who is ahead of the polls for the Bulgarian Presidency, has thanked Merkel for her endorsement, and for Germany's support for the efforts to crack down on corruption and crime, as well as in the economic sphere.

He further stressed the “will” of the Borisov Cabinet “to turn Bulgaria into a modern and competitive part of the European economy.”

Plevneliev, a long-time construction entrepreneur with a career in Germany, who served as Bulgaria's Regional Development Minister for two years before being nominated earlier this month to run for President in the October 23 elections, also said he was happy to come back to the building of the CDU headquarters in Berlin, after he took part in its construction 15 years ago.