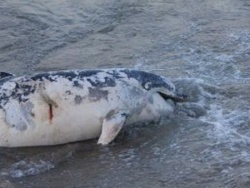 Photo of the dead dolphin found on September 01, allegedly shot. Photo by burgasnews.com

No evidence points towards potential foul play involved in the death of several Black Sea dolphins that were washed ashore in Bulgaria, the country's Agriculture Minister Miroslav Naydenov has stated.

After meeting experts, the Minister explained that the dolphins most probably died due to "natural causes". He added that 100 000 to 200 000 dolphins inhabit Bulgaria's Black Sea region.

Honest Bulgarian fishermen would never hurt a dolphin, Naydenov pointed out, as cited by Darik radio. However, he said that legal measures are considered concerning contacting the country's Prosecutor's Office whenever a dolphin washed ashore is suspected to have been murdered. The Minister also revealed that a research on the Black Sea dolphins' population financed by EU funds is to be carried out.

Bulgaria's Deputy Environment Minister, Evdokiya Maneva, reminded on Tuesday that a total of 25 dolphins have been found dead on Bulgaria's Black Sea coast in 2011, while the number was 53 in 2010, which she believes is circumstantial evidence that the recently publicized death cases are the result of natural causes.

Recently, a dead dolphin, allegedly with multiple shot wounds, was washed ashore on the southern Bulgarian Black Sea coast. Several other dead dolphins were found in the days that followed.