Trial over Ransom for Kidnapped Businessman Starts in Sofia 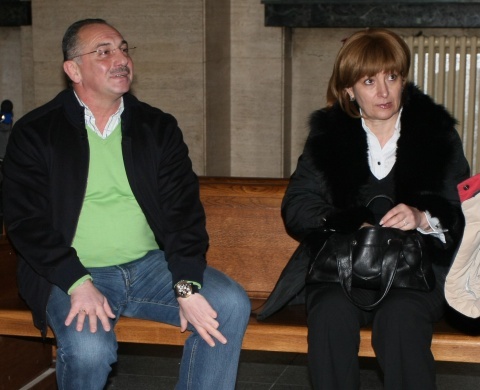 Businessman, Angel Bonchev (l) and his wife Kameliya (r), who are part of the victims of the alleged kidnap gang "The Impudent," are seen in Court during the case against the abductors, which is different than their civil claim. Photo by BGNES

The Sofia City Court started Monday the civil trial of businessman, Angel Bonchev, and his wife Kameliya against the breast cancer foundation Tomorrow for Everyone.

The Bulgarian family, involved in a peculiar kidnapping saga back in 2008, demands that the money they donated to the foundation fighting breast cancer be returned to them.

"We were forced to donate the money," Angel Bonchev, the former president of the Bulgarian Litex Football Club, reiterated before the magistrates, pointing out that the said foundation has not shown any interest towards him and his family all while his wife was also battling cancer.

Angel Bonchev and his wife, Kameliya, were both abducted for ransom in 2008, allegedly by an organized crime group, later called "The Impudent."

Kameliya Boncheva was released on July 30 2008, 20 days after she was kidnapped. She disappeared when attempting to give her husband's abductors the first BGN 500 000 of the total of BGN 3 M that they have demanded as ransom. Angel Bonchev himself was kidnapped on May 22 and released fifty days later.

One day before Kameliya Boncheva was released, her husband announced he is donating the sum of EUR 157 000 to the Tomorrow for Everyone foundation. Bonchev said the money is what his friends had collected for him to pay as a ransom for the freedom of his wife.

Back then, the chairwoman of the foundation, Rumyana Kozareva, denied speculations that the money is to be given to the kidnappers, saying that Bonchev's move was very surprising to them.

At the beginning of the year, an investigative report of the Bulgarian National Television, BNT, revealed that the information of the Chair of the foundation's Governing Board, Nina Hadzhiyska that Tomorrow for Everyone had opened a center for rehabilitation of women recovering from breast cancer did not entirely correspond to the truth since patients were paying for their treatment and the center also offered SPA services and massages.

Kameliya Boncheva said Monday what the foundation is doing is immoral, adding the family, initially, did not ask for the money over fear and because she had to take care of her own health first.

Bonchev on his part insisted he knew Tomorrow for Everyone was violating the law since the day he donated the money. He explained he never met anyone from the Foundation, but read a statement on their site proclaiming there was "no force on earth that would make them refund the money."

Two witnesses were questioned by the magistrates Monday.

The trial is scheduled to resume on November 7, when two policemen from the Unit for Combatting Organized Crime, GDBOP, are to take the witness stand.