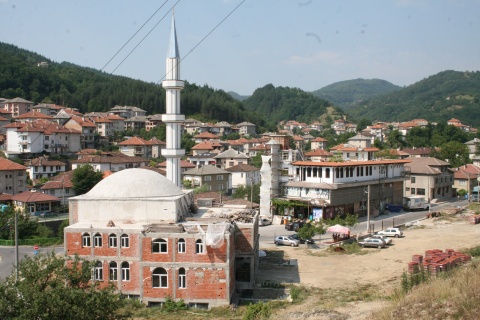 Some religious communities in Bulgaria face issues, according to the US State Department. Pictured: the mosque in the southern Bulgarian town of Zlatograd. Photo by BGNES

Freedom of religion is guaranteed in Bulgaria but the government is inconsistent in enforcing it, according to the July-December 2010 International Religious Freedom Report of the US State Department.

The new US State Department report on religious freedom around the world was released September 13, 2011. The Annual Report has historically covered a reporting period from July 1of one year through June 30 of the following year. The current Report, however, covers a six-month period from July 1, 2010, through December 31, 2010, because the Department of State is shifting to a calendar year reporting period. The Department of State submits the report to the US Congress.

The May 20, 2011, incident at the Sofia Mosque in which nationalists from the Ataka party assaulted praying Muslims is not covered in the reporting period of the document in question.

"The constitution and other laws and policies protect religious freedom and, in practice, the government generally enforced these protections. However, the constitution designates Eastern Orthodox Christianity as the "traditional" religion, exempting it from having to register in court as required for all other religious groups," says the section on Bulgaria of the US State Department religious freedom report.

At the same time, the report points out there were some concerns that the government did not proactively intervene to prevent societal abuses, and continuing reports of intolerance from police and local authorities during the reporting period.

"There were reports of societal abuses or discrimination based on religious affiliation, belief, or practice. Discrimination, harassment, and general public intolerance of some religious groups remained an intermittent problem. There was an increasing number of anti-Semitic incidents and vandalism against mosques. The US government discusses religious freedom with the government as part of its overall policy to promote human rights," the US State Department says.

The paper notes there are 107 registered religious groups in addition to the Bulgarian Orthodox Church (BOC).

It also discusses the Bulgarian legislation on religious freedom, stressing that all Bulgarian public schools at all levels offer an optional religious education course that covers Christianity and Islam, and "examines the historical, philosophical, and cultural aspects of religion and introduces students to the moral values of different religious groups," and points out that the Bulgarian government does not permit religious headdresses in official photos for national identity documents.

"The [Bulgarian] government observes the following religious holidays as national holidays: Orthodox Christmas, Good Friday, and Easter. In addition, the government respects the holidays of non-Orthodox religious groups, including Muslim, Catholic, Jewish, evangelical Christian, and Bahai groups, and grants their members nonworking days," according to the report.

The US State Department also mentions the alleged problems with the Jehovah's Witnesses in Bulgaria, saying that "some nontraditional groups continued to face discrimination and prejudice from local authorities in certain localities, despite obtaining national registration from the Sofia City Court... Both Jehovah's Witnesses and the Muslim community continued to report problems obtaining construction permits for new prayer houses and mosques."

"The [Bulgarian] government generally respected religious freedom in law and in practice; however, it did not enforce legal and policy protections of religious freedom consistently. There were allegations that authorities persecuted Muslims under the guise of preventing radical Islam," the US State Department stresses, referring to the long-time dispute over the Office of the Bulgarian Chief Mufti between Mustafa Hadji and Nedim Gendzhev.

The report also reminds the case with the Bulgarian State National Security Agency DANS carrying out home searches in October 2010 with respect to suspected radical Islam activities, summing up the results of the operation as follows,

"There were reports of abuses of religious freedom in the country. The spokesman for the Office of the Chief Mufti complained of increased repression by the government, including unwarranted arrests intended to intimidate Muslim leaders... On October 6, law enforcement and security forces raided the homes of imams and offices in the regions of Smolyan, Pazardzhik, and Blagoevgrad. They seized Islamic literature and financial documents that they considered to be related to activities of an illegal branch of the Islamist organization Al Waqf Al Islami. According to the government's official press release, the organization was seeking to provoke religious hatred and called for undermining the constitutional order. The office of Mustafa Hadji responded that none of the persons involved espoused extremist ideals. No arrests were made; an investigation continued at year's end."

The US State Department concludes that in the second half of 2010 relations in Bulgaria between religious groups generally remained civil and tolerant; however, discrimination, harassment, and public intolerance of some religious groups remained intermittent problems.

The US Embassy in Bulgaria is reported to have regularly monitored religious freedom through contacts with government officials, members of parliament, clergy and lay leaders of religious communities, and nongovernmental organizations.