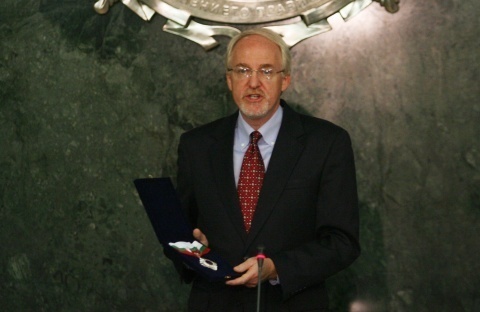 The following cable by John Beyrle, US Ambassador to Bulgaria before going to Moscow, dated March 27, 2007, has been released by WikiLeaks and their Bulgarian partner, the site for investigative journalism Bivol.bg.

Classified By: Charge d'Affairs, a.i. Alex Karagiannis for reasons 1.4 (b) and (d)

¶1.  (S)  Summary: Bulgaria is set to announce a decision to deploy an additional 50 soldiers to take over the Entry Control Point Number Four mission at Kandahar Airfield.  It is keeping this decision under tight wraps for now.  We expect the formal decision will be made just before the NATO Summit, and the announcement itself probably in Bucharest by the Prime Minister.  Both Ambassador Poptodorova in Washington and Deputy Defense Minister Yankulova (strictly protect) have foreshadowed this outcome and the sensitivity of the decision and announcement timing.  The new deployment will increase the number of Bulgarian troops in Kandahar to 270 and the number in Afghanistan to 467.  Taking responsibility for Entry Control Point Number Four will be the Bulgarian's first mission in Regional Command - South (RC-S) outside a protected perimeter.   Possible additional contributions such as Operational Mentor and Liaison Teams (OMLT) and/or a Role Two Military Medical Treatment Facility are unlikely to be included in this round, but remain possibilities for 2009.  End Summary.

2.  (S)  U.S. officials have exerted steady pressure on the Government of Bulgaria for months to increase its Afghan contribution with a sizable new contingent.  It is now paying off.  While a formal decision is not yet taken, the signs point to the deployment of an additional 50 soldiers for the Entry Control Point Number Four mission at Kandahar Airfield. Both Bulgarian Ambassador Poptodorova and Deputy Defense Minister Yankulova have acknowledged this in separate meetings with U.S. officials.  The decision must be formally approved by the Council of Ministers before it is official. This is lined up for just before the NATO Summit.

¶3.  (S)  The decision to accept this new mission in Afghanistan demonstrates significant political leadership by Prime Minister Sergei Stanishev and his Deputy Prime Minister and Minister of Foreign Affairs Ivailo Kalfin.  Current deployments to Afghanistan are unpopular and the ruling coalition is under increasing pressure to focus its energy and resources on domestic concerns.  Having more than quintupled its troops in Afghanistan in 2007, many in the Bulgarian government had said further increases were impossible.  Moreover, the Bulgarian Armed Forces itself is in a state of transition: this is its first year as a fully professional military and it was recently announced that approximately 8,000 positions and three bases will be eliminated in an effort to streamline and modernize the military.  Short of funds and under pressure from the populist GERB party, the ruling Bulgarian Socialist Party has tried to hunker down to avoid or delay additional commitments to Afghanistan.  Steady U.S. and NATO engagement, combined with Bulgarian leaders, commitment to meet NATO obligations and be seen as a reliable partner in international security, were instrumental in turning that around.

4.  (S)  Currently, the bulk of Bulgaria's 417 soldiers in Afghanistan are in RC-S where a 219-soldier infantry company guards the inner perimeter of Kandahar Airfield.  The additional 50 troops, who will be responsible for one of the two main entry control points to the Airfield, will be able to work in complement with the soldiers of the infantry company already manning the perimeter watch towers.

¶5.  (U)  The remaining 198 Bulgarian soldiers in Afghanistan consist primarily of a mechanized company and a mechanized platoon operating in Kabul, two military medical teams in Herat and one in Kabul, and two Land Forces officers embedded in the Hungarian PRT in Pol-e Khomri.

7.  (S)  Besides the Entry Control Point mission, we have consistently pressed Bulgaria to contribute two Operational Mentor and Liaison Teams (OMLTs) and a Role Two Military Medical Treatment Facility.  Both of these options are still on the table, but it appears unlikely that the Bulgarians will volunteer next week to take on either of these new missions in addition to the ECP.  Intensified NATO engagement with the Bulgarians in the form of high-level contact or working-level OMLT briefs would help bring Bulgaria closer to acceptance of these new roles.

8.  (S)  While a formal decision is still days off, and there is still some scope for a mis-step, we would be surprised if Bulgaria does not come through.  Too much is at stake after they signaled positively.  Approval for the ECP mission shows genuine leadership by the PM and Deputy PM/FM (and President as commander in chief who has to sign off on any overseas deployments) to sustain the pro-NATO course of the ruling coalition on security affairs.  It will also signal to the public that last year's troop increases were not a one-off event, but part of long-term and deepening commitment to ISAF and Afghanistan.  End Comment.