Bulgarian Communist Dictator Zhivkov Pops Up on Billboard in Nessebar 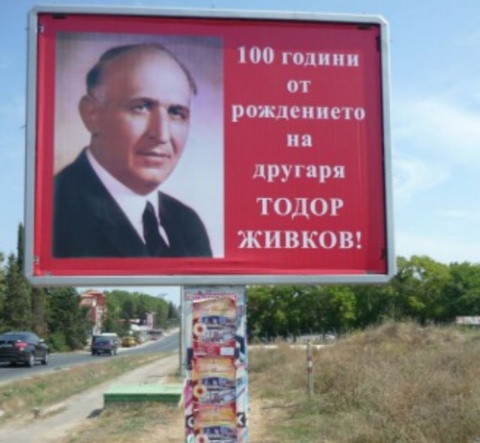 The billboard featuring Todor Zhivkov, Bulgaria's communist dictator, in Nessebar for which a local resident paid with his savings. Photo by Burgas24

A local resident has rented a billboard in the Bulgarian Black Sea resort of Nessebar in order to feature a portrait of Bulgaria's communist dictator Todor Zhivkov for his centenary.

The billboard featuring the long-time dictator of the People's Republic of Bulgaria toppled in 1989 is the initiative of a man named Docho Dochev, who believes that Zhivkov should not be forgotten, Burgas24 reported.

"In 1989, when comrade Todor Zhivkov resigned, I started a piggy bank at home to collect money for him. He was accused of theft but at the end it turned out that he had just one villa," Dochev is quoted as saying.

He has now used the piggy bank money he collected since the early 1990s in order to pay the Municipality of Nessebar, the most popular Bulgarian Black Sea resort, for the billboard featuring the dictator's portrait, reading "100 Years since the Birth of Comrade Todor Zhivkov!"

The man has a huge collection of books and photos about Zhivkov, and is resentful about what he describes as the ingratitude of the Bulgarian society towards the former communist dictator.

His billboard is one more event that raises serious questions about Bulgarians' coming to terms with their communist past and its interpretations.

On September 7, 2011, dozens of Bulgarians and some political figures flocked to the town of Pravets to commemorate the 100th anniversary of September 7, 1911, the birthday of longtime communist leader of Bulgaria Todor Zhivkov.