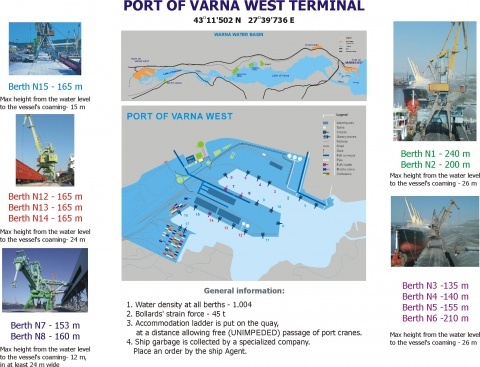 Bulgaria's Black Sea Port Varna registered a record amount of monthly freight traffic in August 2011, and a substantial increase in the first eight months of 2011.

In August alone, Bulgaria's Port Varna processed a total of 1.014 million metric tons of trade items, which an absolute monthly record for the port.

The major share of the freight traffic in Port Varna has been generated by grain exports as well as the exports of the fertilizer plants in the industrial complex in Devnya.

Only on August 31, Port Varna-East processed 3000 trucks with 30 000 metric tons of grain, including wheat, corn, rapeseed, and barley).

The container traffic at Port Varna also saw an increase in January-August 2011 – it grew by 8% year-on-year reaching a total of 82 000 TEU.

Because of the increased grain trade, Port Varna-West, which is located 22 km inside the coast and is linked with the Black Sea through a canal via the Varna Lake and the Beloslav Lake, has also been fit for processing grain through a renovation of its storage and loading facilities.

Port Varna is working on its computerized system for the electronic processing of all goods that are not transported in containers, which is the last phase of its full-fledged electronic document system for the entire freight traffic expected to be completed in March 2012.

According to the Port Varna management, the port will have processed more than 8 million metric tons of freight in 2011.

In spite of the good news about the port's increased freight traffic, the past three years have been marked about the government's indecision about the expansion of Port Varna.

At the end of February 2011, Bulgaria's Cabinet decided to start talks with Japan to annual a low-interest loan previously deemed to be of crucial importance for the development of Bulgarian Black Sea ports Varna and Burgas.

"This would have been an investment that is very hard to repay, and it could not have been done with the funds of Port Varna," Port Varna CEO Danail Papazov said in June 2011 defending the Cabinet's decision to give up the Japanese loan.

Bulgaria's Borisov Cabinet has made it clear it decided to go for a termination of the Japanese loan for Port Varna because of the great hardship currently experienced by state company "Port Infrastructure" and Port Burgas Jsc with the repayment of a previous loan that Bulgaria got from Japan for the construction of a bulk cargo terminal.

The brand new terminal at Port Burgas there was constructed with a USD 188 M (BGN 250 M) loan from the Japan Bank for International Cooperation, signed in 1998.

An analysis of the Transport Ministry adopted by the Borisov Cabinet in March has shown that Port Burgas and the Port Infrastructure company have hardly any way of repaying the already existing loan. Port Burgas has negative financial results, and has borrowed heavily in order to pay its dues to JBIC/JICA, while the Port Infrastructure company is projected to have negative annual balances until 2020 when the first loan will be repaid.

Thus, back in March the Borisov Cabinet assigned the Ministers of Finance, Foreign Affairs, and Transport with the task to handle the talks with the Japanese for the termination of the otherwise favorable second loan.

In June 2010, Bulgaria's then Transport Minister Alexander Tsvetkov and Deputy Transport Minister Ivaylo Mosovski (who succeeded Tsvetkov in May 2011) suggested that the project for the new port container terminal in Varna has to be reconsidered because of the fate of the project in the other major Bulgarian Black Sea Port of Burgas.

Port Varna consists of two parts - Port Varna-East, which is on the Black Sea coast very close to the city downtown and the central Varna railway station, and Port Varna-West, located in the Beloslav Lake some 22 km inside the land, near the industrial town of Devnya. Statements by Varna officials such as ex City Council head Gutsanov have indicated that Port Varna-East should be moved to open up the area for business and hotel developments, a proposal highly criticized by some Bulgarian scholars.