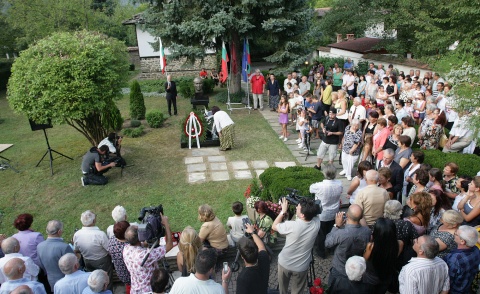 Dozens of Bulgarians and some political figures flocked to the town of Pravets to commemorate the 100th anniversary of the September 7, 1911 birth of longtime communist leader of Bulgaria Todor Zhivkov.

The event was honored by no senior Bulgarian statesmen, but Pravets mayor Nikola Nitov, as well as politicians from the Bulgarian Socialist Party, heir to Zhivkov's Bulgarian Communist Party, were present at the celebration.

The occassion was honored by temporary ambassador to Sofia of the Popular Democratic Republic of Korea Choi Yoon Chon, who remembered the warm friendly relations between Bulgaria and North Korea during Zhivkov's times.

Ordinary Bulgarian citizens gathered in Pravets recollected what they saw as the welfare and sense of direction that Bulgarians experienced during Zhivkov's rule, 1954-1989.

The military orchestra of the Bulgarian Ministry of Defense had initially accepted to play at the event commemorating the former Bulgarian head of state, but eventually declined after the Ministry learned that the event will not be attended by current leaders of state.

Wednesday's celebrations featured an exhibition of presents given to Zhivkov by world leaders during the times of his rule, displayed in the house where he was born and grew up.