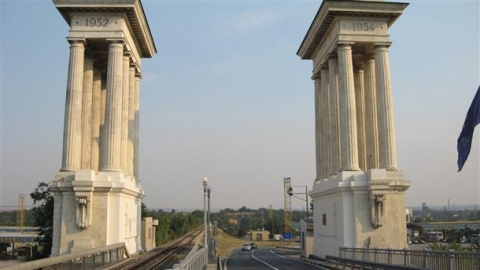 Danube Bridge 1 between the city Ruse and Romania's Giurgiu is the only one existing on the Danube to connect Bulgaria and Romania. Photo by BGNES

The repaired Bulgarian section of Danube Bridge 1 between the city Ruse and Romania's Giurgiu was opened Saturday by Prime Minister, Boyko Borisov.

The bridge is the only one existing on the Danube to connect Bulgaria and Romania, for which the Bulgarian government has allocated BGN 1.7 M.

"Our Danube capital Ruse needed these reconstruction works. When facts speak for themselves, even the opposition remains quiet. When our visitors enter Bulgaria, they will immediately feel the upsurge that is taking place in our country. Construction works at the Danube 2 bridge are also progressing nicely and I hope once it is finished traffic will double on both" Borisov said at the opening.

The Bulgarian side of Danube Bridge 1 was repaired in the course of two months with works launched on June 30, and finished on time and on schedule. The asphalt pavement, the hydro-isolation and the concrete pavement under the asphalt were fully replaced.

The so-called joint Danube strategy of Bulgaria and Romania includes hydro power cascades on the Danube as well as building more Danube bridges in addition to the existing Danube Bridge 1 and Danube Bridge 2 at Vidin-Calafat, which is still under construction. There have been discussions of combining the future bridges and hydro-power plants.