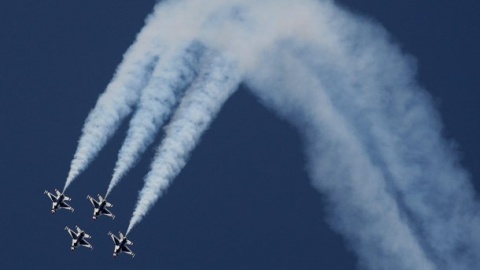 Bulgaria is celebrating the 100th anniversary of the country's aviation a large-scale air show "Skies for Everyone." Photo by BGNES

The festivities are held over the weekend at the Krumovo airfield.

US Ambassador in Sofia, James Warlick, also attended the event.

The officials examined the jetfighters of leading companies such as the Swedish Gripen, The Eurofighter Typhoon, the US F-16 and the Russian MIG-29. They were also greeted by an official formation of the Krumovo servicemen.

The air show, titled "Skies for Everyone," began with a retro parade of Bulgarian planes. The spectators also saw an unusual contest race between a Formula 2 racecar and a MIG-29. The pilot of the car is Bulgarian competitor, Plamen Kralev.

MIG-29 is going to be shown for the first time on the Balkans. Swedish, Russian, German, Romanian, and Swiss air teams will also conduct demonstrations. Bulgarian pilots will fly on MIG-29 and 21, SU-25, choppers MI-17, 24 and Cougar.

Nearly 10 000 have gathered at the airfield to watch the air show. Huge traffic congestions are expected in the area.