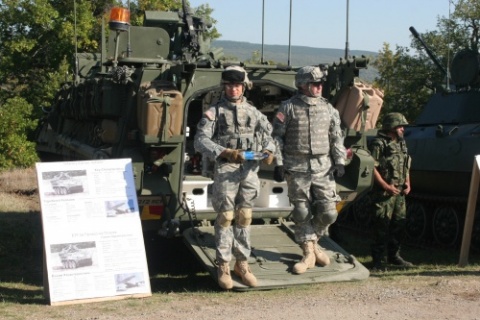 The Watchful Guard 2011 exercise is held between August 20th and September 2nd at the Novo Selo training ground. 104 servicemen from Military Police, instructors and military policemen from the Tennessee National Guard, and employees from the Special Police Forces Directorate at the Interior Ministry are taking part.

The joint drills of Bulgarian and American military police and special police forces will also be watched Tuesday by US Ambassador in Sofia, James Warlick, the Chief Secretary of the Interior, Kalin Geogriev, and the Land Forces Commander, General-Major, Stefan Vasilev.

The drills aim at better preparation and readiness of military police in carrying out standard operational procedures and compliance with NATO standards.

As part of the Bulgarian-US military cooperation and partnership, Bulgaria is paired with the state of Tennessee (which is similar to Bulgaria in size and population) under the State Partnership Program of the US Department of Defense.

The Novo Selo Training Ground is one of the four Bulgarian military facilities used by the United States under an intergovernmental agreement, which also provides for the stationing of 2 500 US soldiers in Bulgaria, and up to 5 000 for up to a month during their rotation.