NYC Recovers after Being Spared by Irene 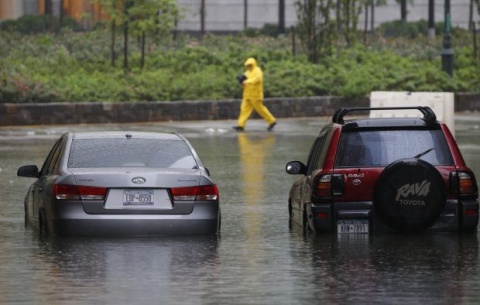 Many streets in NYC including those in Lower Manhattan, Queens, Brooklyn and Long Island are flooded, after tropical storm Irene passed through the "Big Apple." Photo by BGNES

Live in New York City is returning to normal after hurricane Irene passed through it Sunday.

The "monster" hurricane which hit the American East Coast over the weekend spared the "Big Apple" after being downgraded to a tropical storm before reaching it.

The evacuation order involving 370 000 people living in low areas, near water, was lifted at 3 pm local time. Lower Manhattan, with the Wall Street financial district and NYSE, which expected the worst damage, endured a weaker clash then initial forecasts.

Many streets, however, including those in Lower Manhattan, Queens, Brooklyn and Long Island are flooded.

As of Sunday night airports in the NYC area remained closed. Flights in the Washington DC area, which was not hit directly by Irene, have been restored with slight delays.

It is not yet known when JFK, La Guardia and Newark airports, servicing a huge number of passengers in NYC and NJ will reopen for traffic. The cancellation of thousands of flights has stirred huge havoc across America and internationally.

At least 18 people died when the hurricane passed through the US East Coast before being downgraded to tropical storm - 6 in NC, 4 in VA, 4 in PA, and 1 in NJ, CT, FL, and MD each.

The wind gusts demolished buildings in North Carolina and Virginia. Millions of households are without power.