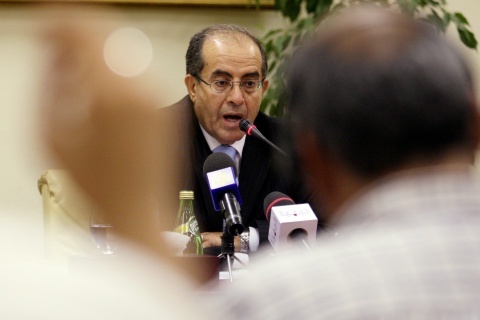 The chair of the executive board of Libyan Transitional National Council Mahmoud Jibril speaks during a press conference about the current situation in Libya,in Doha, Qatar on 23 August 2011. EPA/BGNES

Jibril spoke at a news conference after meeting French President Nicolas Sarkozy in Paris, while on a round trip to ensure international financial and political support for what appears to be the next government of Libya.

"National reconciliation is a top priority for the National Transitional Council. We must achieve one Libya for all Libyans," said Jibril.

The months long rebellion against the 4-decade rule of Libyan leader Muammar Gaddafi, albeit meeting powerful popular support, has divided Libyan society, with some segments remaining supportive of Gaddafi.

Wednesday Jibril acknowledged there are difficult challenges that lie ahead for the next rulers of the country.

Apart from the division, he recalled what he saw as the absence of a proper political culture and climate in his home country for some 42 years.