Rioters Break Into Bulgarian Embassy in Libya during Battle for Tripoli 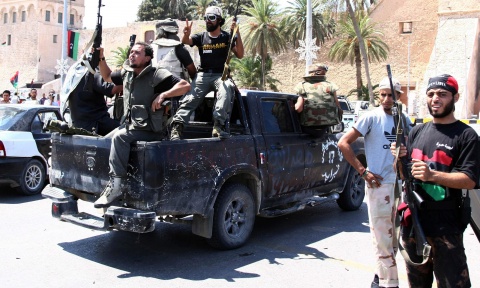 Bulgaria's Embassy in the Libyan capital has fallen prey to rioters in the midst of the raging Battle for Tripoli between dictator Muammar Gaddafi's loyalists and the rebels, the Bulgarian Foreign Ministry announced.

“Unknown armed persons broke into the building of the Bulgarian Embassy in Tripoli the night of August 22, 2011,” the Foreign Ministry in Sofia said late Wednesday afternoon, almost two days after the intrusion.

No persons have been hurt during the breaking in, and the material damages inflicted upon the Bulgarian Embassy in Tripoli are said to be “insignificant.”

According to the Bulgarian Foreign Ministry, the circumstances around the incident are yet to be clarified.

There is no indication if the rioters who broke into the Bulgarian Embassy in Tripoli were from the forces of the Gaddafi loyalists, the Libyan rebels, or sheer looters.

Fighting between regime loyalists and rebel forces in Tripoli has continued over the past four days in spite of the apparent successes of the rebels who on Tuesday took over Gaddafi's compound the city center, with looting reported only occasionally overnight.

The Bulgarian diplomatic quarters in Libya's capital are not the first to fall prey to intrusions amidst the ongoing violence.

Two or three local employees are said to have been working in South Korean diplomatic building in Tripoli at the time of the looting but no one was injured.

About 30 rioters stormed the South Korean ambassador's residence building in the Libyan capital Tuesday evening (local time) – apparently at roughly the same time period when the Bulgarian Embassy in Libya was broken into.