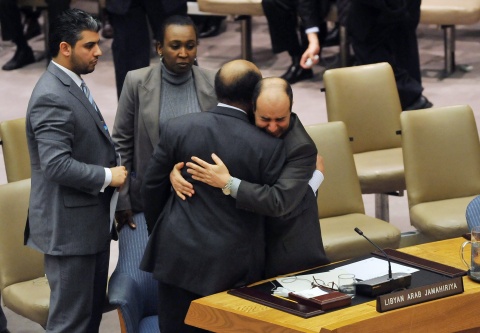 Ibrahim Dabbashi, former deputy ambassador of Libya to the United Nations, has claimed that Gaddafi is likely to kill himself when he gets captured.

"I think he [Gaddafi] will commit suicide once he feels that he has no way to escape," Dabbashi told BBC Wednesday.

Dabbashi was the first Libyan Ambassador to defect after Gaddafi's crackdown on pro-democracy protesters and now represents the rebel-led National Transitional Council (NTC).

In a Tuesday interview, however, Muammar Gaddafi's former right-hand man, Abdel Salam Jalloud, warned that the strongman was not likely to give up easily and would not commit suicide in his bunker as Adolf Hitler did.

Jalloud, who has defected to Italy, said he believed it impossible that Gaddafi would surrender, adding that the Libyan dictator did not have the courage to commit suicide but could ask one of his aides to shoot him to avoid being caught by the rebels.

Gaddafi's former closest aide and a former Libyan Prime Minister explained that it was too late for the tyrant to negotiate a deal with advancing rebels and that he would probably end up dead.

In his words, the tyrant had no chance of fleeing Tripoli without an international agreement, which was out of the question.

Gaddafi's ex ally further noted that the regime would be toppled in 10 days or less.