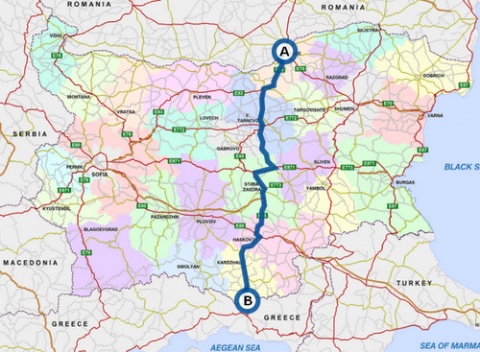 Bulgaria's Cabinet has declared the road from the Danube city of Ruse on the Romanian border to the Makaza Pass on the Greece border to be a project "of national importance" in a long-awaited move.

The long-anticipated decision of the Bulgarian government to make the Ruse-Makaza road a "priority project" is justified with the need to absorb EU funds under Operational Program "Transport", which would allow faster administrative procedures for investments, land expropriation, and construction.

The Bulgarian government plans to turn the road in question into a "high-speed way" (with four lanes), and to construct the 24-km road section from the city of Kardzhali to Makaza with EU funds from the Transport operational program. The section is to be constructed by a consortium, "Kardzhali-Podkova", of 4 firms for a total of BGN 32 M.

It is still unclear if Wednesday's decision of the Bulgarian government might somehow speed up the realization of one of the most-talked about infrastructure projects in Bulgaria in the past 20 years – the construction of a tunnel under the Shipka Pass in the Stara Planina Mountain (Balkan Mountain), which is supposed to improve greatly the transport links between Northern and Southern Bulgaria along the Ruse-Makaza route.