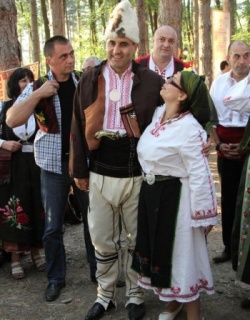 Tsvetanov tried his pottery skills and made a clay dish in minutes.

Zheravna, birthplace of prominent Bulgarian short story writer Yordan Yovkov, holds over the weekend its annual folk festival dedicated to the Bulgarian folk attire and folk music. It is titled "Leap in Time" and lasts 3 days. It is organized for the fourth consecutive time.

Admission for all three days is BGN 20. Visitors are required to get and get dressed in folk attire in order to take part in the festivities. Cell phones, bags, purses, suitcases, backpacks, and even sunglasses are banned at all times.