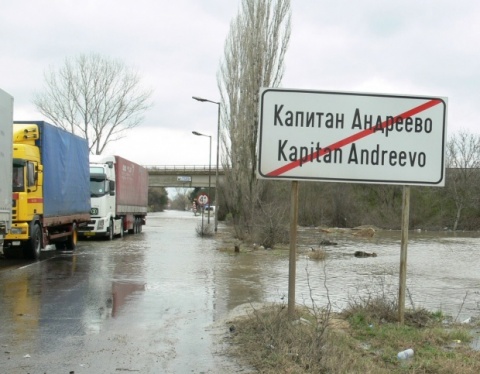 Bulgaria's Kapitan Andreevo border checkpoint will undergo a major overhaul, according to an announcement of the Municipal Administration in the southern city of Haskovo.

The repair works will start after the completion of the technical project and the selection of a contractor, which is expected to be done by November.

The procedure will bring the border checkpoint in line with Schengen acquis requirements.

The principal of the project is the Bulgarian Finance Ministry and the funds will be provided by the World Bank with co-financing from the state budget.

The reconstruction of Bulgaria's biggest land border crossing point will include the construction of 5 new entry/exit lanes, thereby increasing their number to a total of 36.

Kapitan Andreevo will be directly connected to the Maritsa Highway and will span a total area of 185 000 sq. m.

The entry and exit lanes will be paired 2x2, as it is at Turkey's Kapakule border checkpoint.

The project will also include the construction of a medical care unit, a fire truck depot, a lane for vehicles carrying oversize loads or hazardous substances, as well as new WC points.

The fence will be built so as to prevent the site from flooding.

There will be separate parking lots where heavy vehicles and light vehicles will wait in cases of detained goods.

Kapitan Andreevo will also be equipped with cutting-edge technology for the detection of attempts to illegally transfer passengers and goods across the border.

After the overhaul, the border checkpoint will increase its processing capacity by 50%, thereby solving problems created by the intensive traffic over the week.