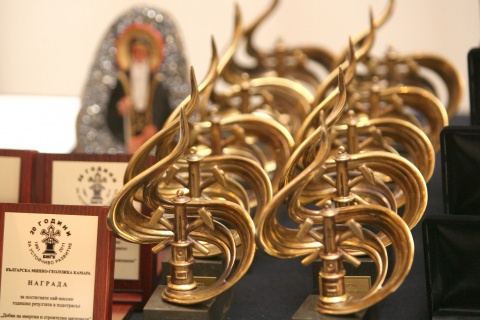 A press conference was held in Sofia Thursday on occasion of Bulgaria's Miner's Day. Photo by BGNES

The management of Bulgarian Gorubso Madan lead and zinc mine reached an agreement with miners, who had threatened to strike after not receiving their salaries for at least 3 months.

Thursday marked the holiday of Bulgarian patron saint Ivan Rilski, who is also traditionally the patron of mining in Bulgaria, but Madan workers saw little reason to rejoice.

They complained of long-term uncertainty and recalled that last year they also met the St. Ivan Rilski day with no salaries.

Representatives of miners' trade unions also brought to attention the old equipment and what they saw as dramatically substandard safety measures in mines accross the country.

At the same time, the Bulgarian Chamber of Mining and Geology reported that for 2010 mining has contributed 5% of Bulgaria's yearly GDP.

For last year the export of metals and metal concentrates has been worth over EUR 2.5 B, and has been marking a growth of 10% for the first half of 2011.

Thursday the management of the Mining Chamber nevertheless also reported that workers at other mines are experiencing plights akin to those of their colleagues at Gorubso Madan.

Bulgarian Minister of Labor and Social Affair Totyu Mladenov informed that a procedure has been started against the company, which can be fined up to EUR 7,500 for failing to pay salaries.

The deal struck between the Gorubso Madan management and workers including a phased payment of due salaries through the fall.