Tymoshenko Given 1 Day to Prep Her Trial Testimonies 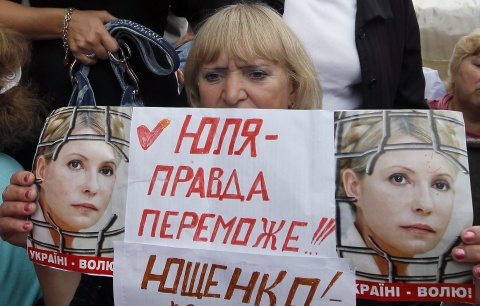 A supporter of the former Ukrainian Prime Minister Yulia Tymoshenko holds her portraits with slogan `Yulia - truth will triumph!`, during their protest in front of the Kiev Pecherskyi District Court, Ukraine, 17 August 2011. EPA/BGNES

Ukraine's former Prime Minister Yulia Tymoshenko has been given only one day by the Kiev Pecherskyi District Court to prepare her testimonies for the trial going on against her over the 2009 Russian gas deal she made while in office.

During Wednesday's court meeting, Tymoshenko said she was not ready to testify, and asked the court to give her time until Monday, August 22, in order to familiarize herself with the testimonies of the summoned witness.

Judge Rodion Kireyev, however, granted her only one day – until the court's next meeting scheduled for 2 pm local time on Thursday.

Earlier on Wednesday, former Ukrainian President Viktor Yushchenko testified against his ex Prime Minister and former ally Yulia Tymoshenko in the latter's trial. He believes that Tymoshenko agreed to maintain Russia's energy yoke on Ukraine that threatens the existence and security of the Ukrainians.