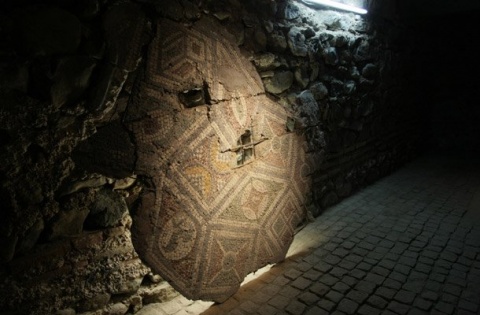 Mosaic fragment at the Hagia Sophia Church in Sofia. Photo by BGNES

A map with little-known yet interesting places to visit in Sofia will be presented Wednesday to Sofia municipal councilors and the business sector.

The colorful leaflet titled "The Unknown Sofia" is to be ready by the end of the month, according to a report of state-owned TV channel BNT.

It will be distributed free of charge at airports, railway stations, hotels and border checkpoints.

Some of the sights on the map are: a mausoleum from the Late Antiquity discovered on the territory of Sofia's South Park; an antique villa with an interesting basilica in the Filipovtsi residential district; a gold mine gallery in the Darvenitsa residential district; an antique villa which belonged to a rich feudal lord back in the Third Century A.D.; the tombstone of Bulgarian writer and poet Ivan Vazov placed between the Sofia Municipality building and the Alexander NevskY Cathedral and a total of 17 century-old oaks scattered all around Sofia.

"The Unknown Sofia" is a project of Sofia Municipality and the Center for Entrepreneurship and Executive Development Bulgaria (CEED).

Further information is available at the project's website, where visitors are invited to suggest new exciting places to visit in the capital.