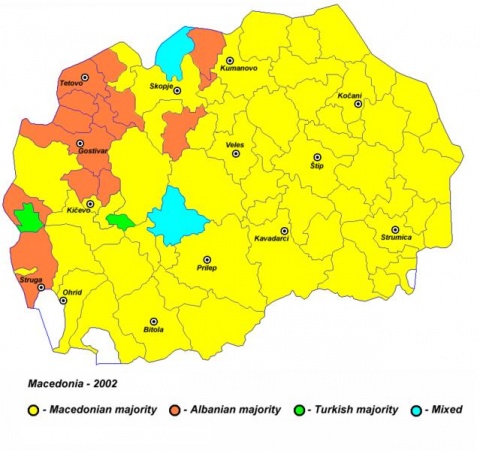 A resumption of the 2001 armed insurgency of ethnic Albanians in Macedonia is unlikely but the inter-ethnic tensions in the country are worsening 10 years later, according to a report of the International Crisis Group (ICG).

The report of the ICG, a Brussels-based NGO, is dedicated to the 10th anniversary of the Ohrid Framework Agreement, which ended the 2001 armed insurgency by Macedonia's ethnic Albanians.

"Ten years after signature of the Ohrid Framework Agreement (OFA) that ended fighting between the country's ethnic Albanians and Macedonians, much of the agreement has been implemented, and a resumption of armed conflict is unlikely," the report states.

The ICG, however, warns that the tensions between political parties and ethnic communities in Macedonia have been growing in the past 5 years, and pays special attention to the rising nationalism of the Macedonians engineered by the governments of Prime Minister Nikola Gruevksi and his VMRO-DPMNE party

"While this part of the Balkans looks to eventual EU membership to secure stability, it remains fragile, and worrying trends – rising ethnic Macedonian nationalism, state capture by the prime minister and his party, decline in media and judicial independence, increased segregation in schools and slow decentralisation – risk undermining the multi-ethnic civil state Macedonia can become," the Brussels-based think tank says.

The ICG urges Macedonian Prime Minister Nikola Gruevski to work closely with his Albanian coalition partners and opposition parties to pass and implement the measures needed for more democratization, inter-ethnic reconciliation and a solution to the name dispute with Greece, and the Albanian parties to strengthen their loyalty to the state and engage more substantially in policy and decision-making.

"A more balanced legislature should also temper the prime minister's state-sponsored nationalism, most evident in the hugely expensive and divisive urban renewal program in Skopje, built around a nationalist vision of ancient Macedonia that is offensive to the country's minorities and Greece alike. The failures to secure NATO membership in April 2008 and to begin negotiations over membership with the EU in 2009, four years after obtaining candidate status, helped Gruevski secure support for his "national renaissance" policy line. The resulting increased emphasis on nationalism, however, is dividing Macedonians unhealthfully between "patriots' and "traitors", irritating Albanians and discouraging Macedonia's friends in the EU," the report concludes.

The ICG especially emphasizes that members of the ruling coalition in Macedonia – Gruevski's VMRO-DPMNE party and the ethnic Albanian Democratic Union for Integration - "were favored for public jobs, without regard for merit. The government reduced criticism in parts of the highly politicized media by buying favors through advertising. Selective fiscal investigation into and subsequent forced bankruptcy of the opposition-leaning television station A1 and detention of its owner were viewed at home and abroad as silencing criticism. As under past administrations, the judiciary lacked independence."

Inter-ethnic relations in Macedonia have suffered as a result of these policies, the report points out, saying that segregation in the education system is becoming more entrenched and Gruevski's push to build a strong state identity based on Macedonia's perceived ancient history leads ethnic Albanians feel to feel excluded.

"[The ethnic Albanians] are more focused on advocating a highly decentralised federal and bilingual state that ethnic Macedonians see as threatening to the country's survival. The two concepts have little in common; managing and shaping them so that they can provide mutual support or at least coexist constructively is difficult. But bringing Macedonia's political and ethnic elites and ordinary citizens closer together around a shared vision of a unified multi-national state is a challenge that the new government cannot avoid," the ICG report stresses.

The International Crisis Group is also especially concerned that the failure to resolve the Macedonia name dispute has the potential to destabilize not just Macedonia but also the entire region.