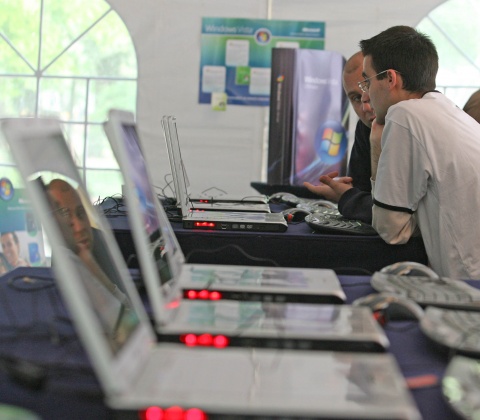 A prominent functionary of Bulgaria’s ruling GERB party has been arrested in the first ever online group shopping scam in the country. File photo

Members of the Parliament and high-ranking police employees are among the 225 Bulgarians who were defrauded in the first ever case of online collective shopping scam.

The Plovdiv police have arrested Venelin Kachakov, 37. He is charged with large-scale fraud and is suspected of draining BGN 600 000.

One of the victims of the scam tells how he discovered on the internet a very attractive offer for an all-inclusive one week vacation in Corfu for BGN 350 only. He found it suspicious that the payment could be done only through a bank transfer, and not at office of the company, but paid the invoice nevertheless.

The fraud has been uncovered after it became clear the offices of the company have been deserted and no one was answering the phone.

The manager of the collective shopping internet site says he still could not believe this happened and promises to reimburse his customers and to sue Euro Holidays.

"This company contacted us at the beginning of June. They explained they were launching a vacation business, and prior to that were in the construction business, and were wealthy people. They said they wanted to propose an interesting offer, which we assessed as realistic," said Srebrin Vatralov.

The Euro Holidays bank accounts have been emptied at the end of July, including the money collected for the Maldives and Corfu trips, and there is no trace of the cash.

Some of defrauded people suspect the internet shopping site of involvement in the scam, something Vatralov firmly denies.

The listed owner of Euro Holidays, Georgi Hristov, is a Bulgarian Roma, who until recently lived on welfare. The company was sold to him in April. There is a nation-wide search warrant for Hristov, who is believed to have been used as a dummy.

An investigative report of the Bulgarian TV channel bTV revealed meanwhile that the arrested Venelin Kachakov is among the top Plovdiv functionaries of the ruling Citizens for European Development of Bulgaria, GERB, party. He is also among the founders of the GERB Entrepreneurs organization.

The organization is a national structure of GERB, founded in October 2008, by 700 representatives of the small and medium business from all over the country.

"What is important for us is the rule of law. We are waiting for the results of the business police probe. What happened can only be described by one word – crime," the Plovdiv Regional Governor, Ivan Totev, is quoted saying.