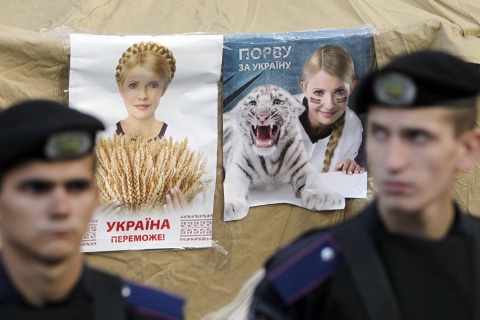 Police stand in front of posters of former Ukrainian Prime Minister Yulia Tymoshenko at a tent camp set up by supporters of Tymoshenko near the Kiev Pecherskyi District Court in Kiev, Ukraine, early 07 August 2011. EPA/BGNES

Ukraine's ex Prime Minister Yulia Tymoshenko has been refused bail by an Ukrainian court after she was arrested 3 days ago for alleged violations during her "Russian natural gas deal" trial.

The District Court in Kiev, the Ukrainian capital, rejected a request by Tymoshenko's lawyer Yuriy Sukhov to release her on bail, RIA Novosti reported, just as her supporters rallied in the streets protesting her detention, and the US and EU representatives expressed concerns about her trail.

On August 5, Judge Rodion Kireyev ruled that Tymoshenko had violated court rules and sought to obstruct her trial.

Tymoshenko is on trial for the 2009 deal for natural gas that her government made with Russia, and is charged with agreeing on an excessive purchase price. Tymoshenko herself claims that Ukrainian President Viktor Yanukovich, a long-time political rival, has orchestrated the trial against her before next years elections.