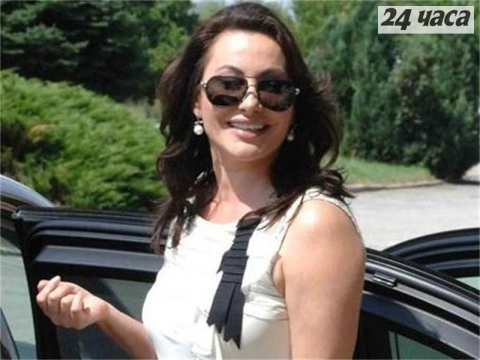 Pavlova came to Bulgaria on Saturday to attend a memorial service for her late husband, who was born on August 6, 1960 and this is why the family had chosen this day to honor Pavlov's memory.

Iliya Pavlov was gunned down in Sofia on March 7 2003, when leaving his offices. His killers remain unknown and at large.

Upon arriving in a private Falcon, Pavlova told reporters, gathered at the small airport in the central Bulgarian town of Gorna Oryahovitsa, she planned to spend some time in Bulgaria with her father and father in law.

The father-in-law, Angel Naydenov, informed, in a phone call, the Bulgarian daily 24 Chassa 24 Hours) that Pavlova, indeed had intentions to stay, but an unexpected message made her change mind.

The Falcon belonged to some friends, who dropped her in Gorna Oryahovits and continued their trip to the Black Sea coast. When Darina learned she must return to Italy, she had made a phone call and the plane arrived immediately. She had departed alone, Naydenov said, adding he had not seen his daughter-in-law and his grandchildren in seven years.

Pavlova had been happy with the up-keeping of her husband chapel, which is maintained by Naydenov. The mourners had left there an open bottle of red wine and a burning cigar – both among the things the businessman enjoyed a lot when alive.

Naydenov says he did not know some of the people who attended the mass, but a car had brought Darina's ailing father from Kazanlak so that he could be at the service.

"She had different reasons to not come to Bulgaria for a long time, but things now are calmer. And I am making preparations to visit her in Italy and see my grandchildren, who will arrive from the US," the father-in-law, cited by 24 Chassa, had stated.

Meanwhile, a reporter visited Darina's native town of Kazanlak and her father's modest home, where he was met by one of the women taking care of the father Kalcho, 85, who underwent a knee join surgery last fall.

The woman told the reporter there was no way Kalcho, who she described as very shy, would talk to the press. She informed he handled well the trip to the memorial service and had been happy to see his daughter.

"She did not come here because she wanted to see her father, not her property," the woman said, adding Kalcho was in constant touch with his daughter via skype and phone.

Meanwhile, neighbors told 24 Hours they had not seen Darina for so long they were not sure they would recognize her.