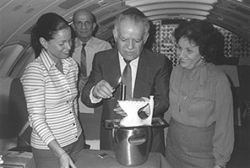 Shulamit Shamir, the wife of former Israeli Prime Minister Yitzhak Shamir, was buried in Jerusalem on Sunday after passing away two days earlier. She was 88.

Prime Minister Benjamin Netanyahu issued a statement of condolence to her family on Friday.

"Prime Minister Benjamin Netanyahu and his wife Sara mourn the death," the prime minister's office said in a statement, without specifying the cause of death.

"She stood by his side since their youth in the Lehi movement and in its ranks fought for the independence and security of Israel," it said.

Shulamit Shamir was born in Bulgaria in 1923. She was arrested upon arrival at age 17 in then British-ruled Palestine due to restrictions on Jewish immigration, and was sent to a detention camp. There she met her future husband Yitzhak Shamir, who had been interred for for his activities as one of the commanders of the underground. They were married in 1944.

Mrs. Shamir joined the Lohamei Herut Israel, Fighters for the Freedom of Israel," the underground group that broke away from Menachem Begin's Irgun, known by its acronym Lehi, where she acted as a courier under the name: Shulamit.

Shulamit is survived by her husband, the former prime minister, who is now hospitalized in a nursing home in central Israel, two children, grandchildren and great-grandchildren.