Masses for Late Great Bulgarian Dimi Panitza to be Served in Sofia, Paris 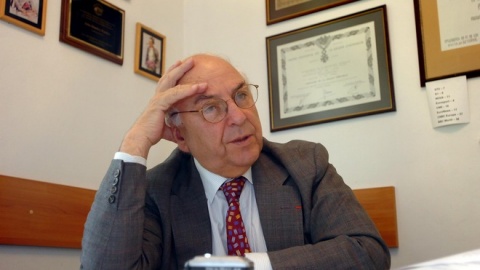 John-Dimitry Panitza, a prominent Bulgarian journalist, philanthropist, patriot and public figure, passed away Friday at the age of 80. Photo by capital.bg

Solemn masses will be served simultaneously in Sofia and Paris on Tuesday to commemorate the memory of John-Dimitry Panitza, a prominent Bulgarian journalist, philanthropist, patriot and public figure, who passed away Friday at the age of 80.

In the Bulgarian capital Sofia the mass will be served on August 2 at 3.30 pm at Saint Sofia church.

Dimi Panitza will be buried in Bulgaria, in the family tomb in Sofia on his own explicit wish, his wife Ivonne has announced.

The funeral will take place in the beginning of October when the urn will be brought to the country.

John-Dimitry Panitza was considered to be the man with the most outstanding international career among Bulgarian journalists. He was also involved in broad charity activities. Chairman and founder of the Free and Democratic Bulgaria Foundation, as well as Junior Achievement–Bulgaria.

He was among the founders of the American University in Bulgaria, a former honorary member of the Bulgarian Academy of Sciences, a recipient of AUBG's honorary degree Doctor Honoris Causa, and of the highest Bulgarian state medal, Stara Planina First class, equivalent to the American medal of Freedom.

Panitza's experience at the Reader's Digest lasted for 40 years. During this time, he reached the position of managing editor of the magazine, which, in addition to the American edition, was publishing editions in some 20 languages around the world, with a total monthly circulation of 30 million copies for more than 100 million readers.

His tree includes a prime minister, a mayor of Sofia, bankers, philanthropists, officers, and revolutionaries – the builders of modern Bulgaria. Panitza was also a Chevalier (Knight) of the French Order of the Legion of Honor and a recipient of the Council of Europe's Pro Merito medal for his contributions to the democratic processes in Eastern Europe.

Dimi Panitza was also a great and dear friend of Novinite.com.