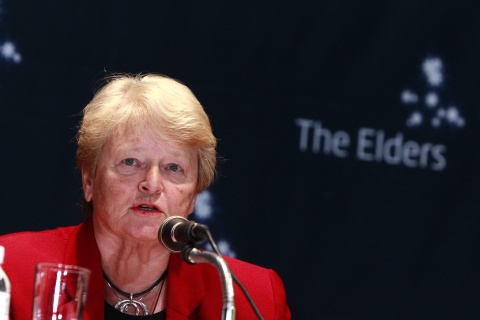 Gro Harlem Brundtland served three terms as Prime Minister of Norway (1981, 1986-89, 1990-96), and has served as the Director General of the World Health Organization. Photo by EPA/BGNES

"Anders Behring Breivik had plans to come to Utoeya (island) while Gro Harlem Brundtland was visiting on Friday, but claims under interrogation that he was delayed," Aftenposten reported on Monday, citing unnamed sources.

Gro Harlem Brundtland is a Norwegian Social democratic politician, diplomat, and physician, and an international leader in sustainable development and public health.

She now serves as a Special Envoy on Climate Change for the United Nations Secretary-General Ban Ki-moon.

The man, who has confessed to carrying out the monstrous massacre at a youth camp in Norway and a bombing in the capital Oslo, is due to make his first appearance in court on Monday to face terrorist charges.

Anders Behring Breivik, 32, admits carrying out a massacre on an island youth camp and a bombing in the capital Oslo in which at least 93 people died. But he has refused to accept criminal responsibility for them, saying that his actions were "gruesome, but necessary".

The country will observe a minute's silence for the victims at 1200 local time (1000 GMT).

Breivik will appear at the hearing an hour later. He has said he is willing to explain his actions to the court.

The court will decide at the hearing whether to keep the suspect in detention pending trial.