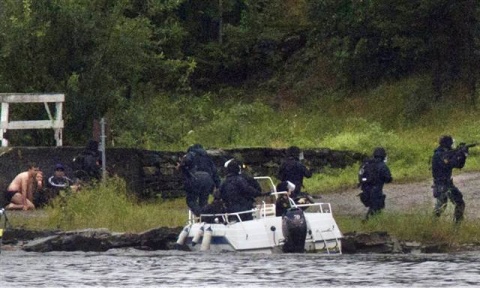 Norwegian SWAT team pictured disembarking on the island of Utoya where a 32-year-old Christian fundamentalist killed dozens in a shooting spree. Photo from khq.com

32-year-old Anders Behring Breivik, who has been arrested for staging Friday's twin terrorist attacks in Norway's Oslo and Utoya Island, has been described as a "loner" in the reports of the Norwegian media.

Breivik, who is said to be a right-wing Christian fundamentalist by the Norwegian police, is also reported to have lived with his mother in a wealthy suburb of west Oslo, to be well educated and to enjoy hunting, the BBC News Channel said.

Breivik has no criminal record. Norway's police announced no other arrests have been made, as cited by international media.

While the police have refused to speculate about the suspect's motives at this stage, they said that he appeared to be a right-wing Christian fundamentalist based on his Facebook and Twitter accounts.

Police said Breivik will face terrorism charges that carry a prison sentence of up to 21 years.

"He has been charged with two counts of terrorism. They have just started to interrogate him," Oslo police spokeswoman Carol Sandbye told the BBC. She said she could not comment on what had been found at his flat or what he had written on social networking sites. She said he would have to appear in court within three days.