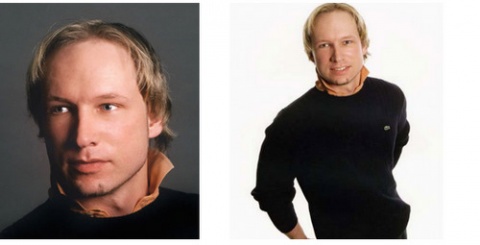 32-year-old Anders Behring Breivik is being named a suspect in the Oslo, Norway, shooting and bombing on Friday, July 22, 2011. (Facebook photo)

Anders Behring Breivik, the 32-year-old detainee believes to have killed at least 91 people in Friday's terrorist attacks in Norway, has been described as a far-right extremist.

Oslo police chief Sveinung Sponheim said his Internet postings "suggest that he has some political traits directed toward the right, and anti-Muslim views", as cited by the BBC.

"But whether that was a motivation for the actual act remains to be seen," he told Norwegian broadcaster NRK.

The Norwegian police have made it clear there is evidence to describe the 32-year-old Anders Behring Breivikm as a right-wing Christian fundamentalist, though they have steered clear of commenting on his motives as of yet.

On his Facebook page, Breivik, a blond, blue-eyed man, describes himself as a Christian and a conservative. The Facebook page is no longer available but it also listed interests such as body-building and freemasonry.

The gunman was described by witnesses who saw him on Utoeya island as tall and blond - and dressed in a police uniform.

The Norwegian newspaper VG quoted a friend as saying that the suspect turned to right-wing extremism when in his late 20s. The paper also said that he participated in online forums expressing strong nationalistic views.

Breivik is thought to have studied at the Oslo Commerce School and his work is listed as Breivik Geofarm, a company Norwegian media is describing as a farming sole proprietorship.

The company was set up to cultivate vegetables, melons, roots and tubers, Norway's TV2 says, and speculation in local media is rife that through such a link he may have had access to fertiliser, an ingredient used in bomb-making.

A Twitter account attributed to the suspect has also emerged but it only has one post, which is a quote from philosopher John Stuart Mill: "One person with a belief is equal to the force of 100,000 who have only interests", the BBC reports. The tweet was posted on 17 July.

Latest data indicates that Breivik killed at least 84 people, mostly teenagers, in his shooting rampage on the Utoya Island where Norway's ruling Labor Party held a youth camp, and another 7 people in the bomb attack in downtown Oslo.

Breivik has no criminal record. Norway's police announced no other arrests have been made, as cited by international media. Police said Breivik will face terrorism charges that carry a prison sentence of up to 21 years.