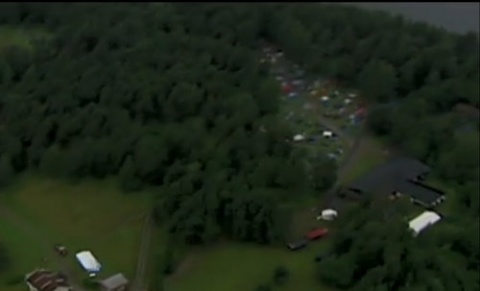 A TV grab from CNN shows the youth camp of the Norwegian Labor Party on the Utoya Island where at least 80 youngsters were murdered in a shooting spree that shocked the world.

Dozens of teenagers have been saved by locals from Friday afternoon's shooting spree on Norway's Utoya Island where a gunman dressed in a police uniform killed at least 80 people.

The youth camp of Norway's ruling Labor Party came under the shooting rampage by the gunman armed with a machine gun shortly after explosions rattled downtown Oslo at about 3:30 pm CET.

As the terrified teenagers on the Utoya Island some 50 km from Oslo tried to escape from the raging gunman, many of them jumped in the water and tried to swim away. A number were rescued as they were picked by local Norwegians who arrived with their private boats as soon as they learned that something wrong was going on the island.

CNN has presented the story of Kasper Ilaug, a 53-year-old computer programmer, who saved some 15-18 from the Utoya Island by sailing there and collecting them with a boat as the shooting spree was still going on.

Ilaug was inside his summer house, a cabin on Norway's Storoya Island, watching the Tour de France when the television broadcast was interrupted by a news flash about the bomb that had exploded in nearby Oslo.

He was alerted by phone by a friend living further away that something wrong was terrible was happening on Utoya, and rushed to the island.

Ilaug collected as many of the terrified children as he could, making a total of three trips. He has described the shocking image that he saw of a group of youngsters whose attention he was trying to get in order to rescue them before he realized that they had been killed.

A number of other locals are also reported to have rescued kids from the youth Labor Party camp the same way as Ilaug.