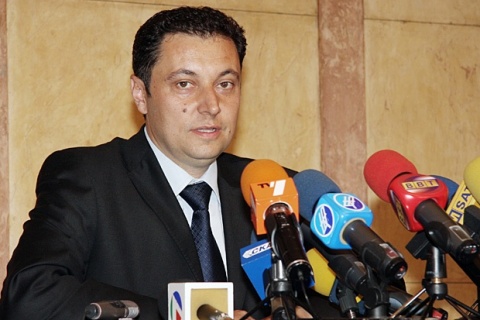 Bulgaria's Conservative RZS leader, Yane Yanev, vows to remain the most critical opposition in the country. Photo by BGNES

Bulgarian Prime Minister, Boyko Borisov, does not think the conservative Order, Law and Justice, RZS, party had blasted its own office on purpose.

The statement was made for the media Thursday by RZS leader, Yane Yanev, after meeting with Borisov to discuss the explosion.

Two explosions shook Bulgaria's capital early Tuesday. The first blast went off at 3:58 a.m. in front of the headquarters of the conservative Order, Law and Justice Party, RZS, in downtown Sofia.

About twenty minutes later another explosion ripped off the air in front of an office of the party of former Prime Minister Ivan Kostov, Democrats for Strong Bulgaria, which is a part of the parliamentary Blue Coalition.

Immediately after the incidents, Borisov stated that "some parties seek to make noise – they must create intrigue; must make tiny explosions, otherwise they will be forgotten."

The meeting was scheduled precisely over the PM's above statement.

Earlier Thursday, he recanted those words, explaining he has been misunderstood and opposes the declaration of the parliamentary group of his ruling Citizens for European Development of Bulgaria, GERB, party saying "there is a coalition of the underground and opponents against Borisov," adding he never agreed on having such declaration.

After the meeting, Yanev informed he had requested to have security guards from the National Security Office, NSO, but declined saying what the outcome has been.

The conservative leader did, however, state Borisov had agreed on proposing to the Parliament to adopt a declaration condemning terrorism, violence, and attempts to stir chaos in the eve of the upcoming local and presidential elections, and even assured the GERB parliamentary group would pass it.

According to Yanev, the PM had further accepted his opinion that political differences must be overcome when it comes to the country's security.

The RZS leader had asked Borisov to initiate a debate on national security since President, Georgi Parvanov, had been playing "deaf and blind."

In conclusion Yanev asked the reporters to not try to find any hidden agenda and arrangements in the meeting, stressing the Conservatives would remain the most critical opposition party.

"There are no grounds for the two parties to become closer. RZS would not support GERB in the upcoming no-confidence vote against the cabinet," the politician concluded.