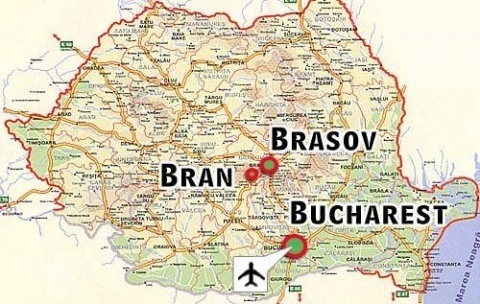 Bulgaria-bound detonators went missing from a train on their way from Brasov to Bulgaria. Map by wseas.us

A total of 79 rocket detonators stolen from a Romanian railway car carrying military equipment to neighboring Bulgaria, have been recovered, but one is still missing.

Romanian police authorities are still looking for the perpetrators of the theft.

One of the boxes with munition detonators was found opened, the Bulgarian Dnevnik daily reports. Nineteen of the 20 detonators it contained have been subsequently discovered in a bag in a nearby forest.

The rocket detonators were found near the town of Chitila, Southern Romania.

Police found the four stolen boxes. According to Gencho Hristov, CEO of Sofia-based firm Sage Consultants AD, an arms trader, who spoke exclusively to Novinite.com (Sofia News Agency), a total of 80 detonators for shells, not 64 as reported by international media, shipped from the Romanian city of Brasov to Bulgaria had disappeared from the Romanian train that was transporting them to Bulgaria.

The theft of the shipment, which was guarded by 10 Romanian gendarmerie officers, was discovered Saturday afternoon at the customs office in Romania's Giurgiu, right before the train was supposed to enter into Bulgaria.

Hristov told Novinite.com (Sofia News Agency) that the missing detonators in question stolen on Romanian territory were a MRV model for 122 mm M-21 OF artillery rockets. The artillery rockets, of which the detonators are part were an incoming transfer from Romania to Bulgaria.

Romanian company ROMARM, the producers of the stolen detonators for a Bulgarian company, has declared it was not responsible for the explosives.