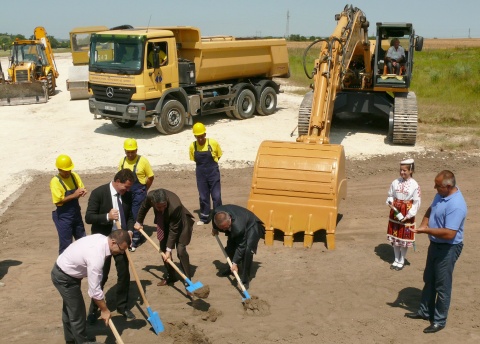 The Bulgarian government has launched the construction of an 8-km section of the Hemus Highway, which is supposed to connect Sofia and Varna through Northern Bulgaria.

The 8 km section will be an extension in the western direction of the existing eastern section of the Hemus Highway running from Varna to the city of Shumen. With the extension, the highway will reach the village of Belokopitovo.

The construction of the new section of Hemus will cost BGN 38 M, and will be fully funded from the state budget. It needs to be completed in 14 months. The Bulgarian company "Avtomagistrali Cherno More" has been picked to construct it.

PM Borisov emphasized at the ground breaking ceremony that his government has managed to set aside funds from other highway projects that have been prioritized in order to revive the construction of the only highway project in Northern Bulgaria, which has been long neglected. Borisov further reminded that his Cabinet has gotten the European Commission to agree that the Hemus Highway should be eligible for EU funding

"Our government has made a real breakthrough in order to guarantee the funding for Hemus. We have put in great efforts so that we can economize from other projects in order to fund this section," the Prime Minister said.

He announced that in 4 weeks the government will give the start of another section of the Hemus Highway, about 11 km long, this time an eastward extension of the existing section from Sofia to Yablanitsa.

The Hemus Highway is supposed to connect Sofia and Varna on the Black Sea through a shorter route than the southern Trakiya Highway (443 km), passing by several major northern cities – Pleven, Veliko Tarnovo, and Shumen. At present, however, only the start section from Sofia to Yablanitsa and the end section from Shumen to Varna have been completed.

Earlier in July, the government started the construction of the 8.5 km section of the Hemus Highway connecting it to the Sofia beltway, which is seen as crucial for unloading the heavy traffic in Sofia's suburban area; it will be built by a Bulgarian-Croatian consortium called Hemus A2. The consortium includes Trace Group Hold, the same company currently constructing Lot 2 of the Trakiya Highway, SK-13 Patstroy AD – Pernik, and Constructor-Engineering AD from Croatia.