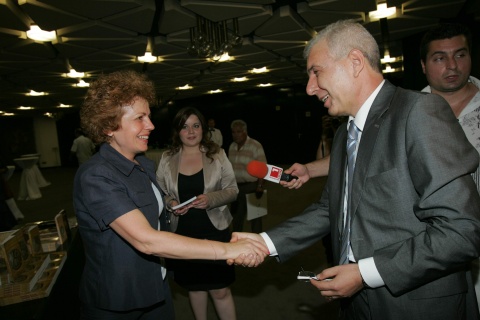 The Mayor of Sofia, Yordanka Fandakova (l), was among the first to get in line to receive an autograph from author Dimitar Nedkov (r). Photo by standartnews

The premiere of the third book of the bestselling novel by Bulgarian author, Dimitar Nedkov, "The Bulgarian's Sign," gathered once again a distinguished crowd of excited readers at the National Palace of Culture.

Top Bulgarian movie and TV series producer, Dimitar Mitovski, was among the crowd of fans. Mitovski, whose name is connected with producing such hits as the movie "Mission London," and the TV series "Undercover" and "Glass House," confirmed plans to film the trilogy for TV because its suspenseful plot and national spirit can make it a blockbuster.

Mitovski, who admits being impressed by the book and reading it in one go, did, however, point out such large-scale project would need serious budget and financing.

Some of the above mentioned individuals are actually characters in the novel and part of the plot – a fact that has largely contributed to the popularity of the novel where the Prime Minister and the President are also among the personalities involved in the story line.

"Everything that happens in the book is based on a real story," Nedkov says.

A mysterious man arrives in May, 2011, in Sofia where his small company takes wealthy westerners on a tour of the ancient sanctuaries on the Balkans. The man is nicknamed the Maltese, but he is actually a Bulgarian businessman everyone believes to be dead – killed in 2003 by one bullet in the heart. The mysterious Maltese is the person who is finally able to gather together the three pieces of the Bulgarian's sign.

The novel intertwines political intrigue, intelligence stories, action and suspense and touches on issues crucial for Bulgaria such as the project to build a second Nuclear Power Plant in the Danube town of Belene, the US missile defense shield, CIA, FBI, KGB and the Bulgarian State Agency for National Security, DANS.

According to the author of the book, who aims at resurrecting the dignity of the Bulgarian nation and at bringing Bulgarians together, the Bulgarian's sign is a small, ancient, symbolic piece that unites Bulgarians.

"There are so many symbols that divide our nation – our national heroes, the Monument of the Soviet Army, World War II, and so many other things. In our history we focus on the dividing lines, while the wise and highly-developed nations seek things that unite them. Many of the artifacts of the Old Continent are buried in our soil. But we fail when it comes to tell our history as a legend, a myth," Nedkov says.

The author promises to keep writing thrillers while foreign publishers have already expressed interest in the trilogy.

At the end of 2009, the author's first fiction book – "The Menace Dan Brown" became one of the 3 top bestsellers in Bulgaria. The "Bulgarian's Sign" has been on the bestsellers' list ever since the first part appeared on bookstands.