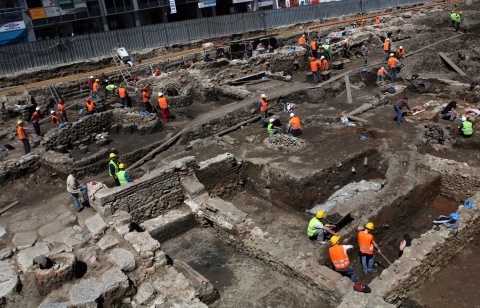 The very downtown of Sofia has seen massive excavations since 2010 over the construction of the Sofia Metro. Photo by BGNES

A large complex of small Christian churches has been gradually unearthed by Bulgarian archaeologists in downtown Sofia during continuing excavations at the construction sites of the Sofia Metro.

During the excavations near the Serdica metro station and the TZUM department store in the downtown of the Bulgarian capital last summer, the archaeologists found the remains of a medieval church.

They have now found two more medieval churches dating back to the 14th and 16th centuries located within 70 m from one another, archaeologist Snezhana Goryanova has revealed.

The northern church is located 30 m away from the Banya Bashi mosque; it was built in the 14th century, during the period of the Second Bulgarian Empire (1185-1396), and is believed to have functioned as a temple until the middle of the 16th century, which is when the second church was built. Sofia was conquered by the Ottoman Turkish Empire in 1385 AD.

While the older church has two layers of murals, the second one has six. It is believed to have functioned until the end of the 19th century when it was destroyed for the construction of the Vitosha Blvd and Sofia's urban planning as the capital of Bulgaria.

Archaeologist Mario Ivanov, who is charge of the excavations near TZUM, said the archaeologists have found items dating back from the 1st to the end of the 19th century. The greatest number of items after from 4th-6th century and the 16th-19th century.

Sofia, called Serdica by the Ancient Thracians, Greeks, and Romans, was the favorite city of Roman Emperor Constantine the Great, who is known for saying, "Serdica is my Rome." The city became part of Bulgaria in 805 AD, and was renamed with its Slavic name Sredets.