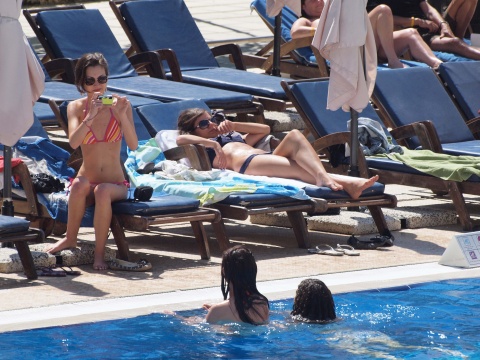 A German girl has perished in an unsafe swimming pool in the Bulgarian resort Golden Sands. Photo by BGNES

A 13-year-old German girl has perished in Bulgaria's Black Sea resort Golden Sands after she was sucked in by the pump of a hotel swimming pool.

The girl, who was on a vacation in Bulgaria with his father, drowned on Monday in the Berlin Hotel in Golden Sands, the Bulgarian Red Cross announced.

The case is under investigation but it is believed that the pump was without the required safety bars, and thus the girl was unable to overcome the current sucking him in. She was later taken to hospital in a coma but died during the night.

"When the kid dove, and came close to the pump, the current was too strong and she couldn't get out," explained Lavrentiy Silov from the Bulgarian Red Cross in Varna, as cited by BNT.

The management of the hotel has refused any comments saying that an investigation is under way.

Inspections showed that the swimming pool in the hotel worked illegally because it had not been authorized by a municipal commission. Only 56 of the 220 swimming pools in the resorts in the Varna Municipality, including Golden Sands, have the respective official authoritization.

The drowning of the German girl is the second such incident in Bulgaria in the past two years, after a 13-year-old girl, Iva Hristova, died in a swimming pool in the city of Razgrad exactly the same way two years ago. Five defendants were charged for Hristova's death only in February 2011, and none have been sentenced yet.